By Kaybe Loughran
Many of us spend hours at the gym and dedicate our vacation time to climbing. “Because it is fun” is often enough of a reason. When life gets real, though, sometimes “fun” doesn't warrant the time invested and the risks taken. When was the last time you asked yourself, your belayer, or your partner “why do you climb?”
The first was par for the course; the latter often hit a little too close to home.

During this period in her life, Josie was seeing what she was physically capable of. She was going after harder and bigger objectives, inspired by her YOSAR comrades and other friends around Yosemite Valley. While it was exciting and fun, it was also mentally exhausting. She felt herself getting out of balance - mentally, emotionally, and physically. She chose to seek some professional guidance.

Josie found a mindset coach who helped her process some heavy topics. She found herself trying to figure out if the tragedy of climbing was worth its gifts, and wondering if she could continue to accept this darker side.

​Over time Josie reached the conclusion that climbing's gifts and its tragedies were not meant to be put against each other on a scale. They were two  elements of the whole, had always been part of the game, and both must be accepted. 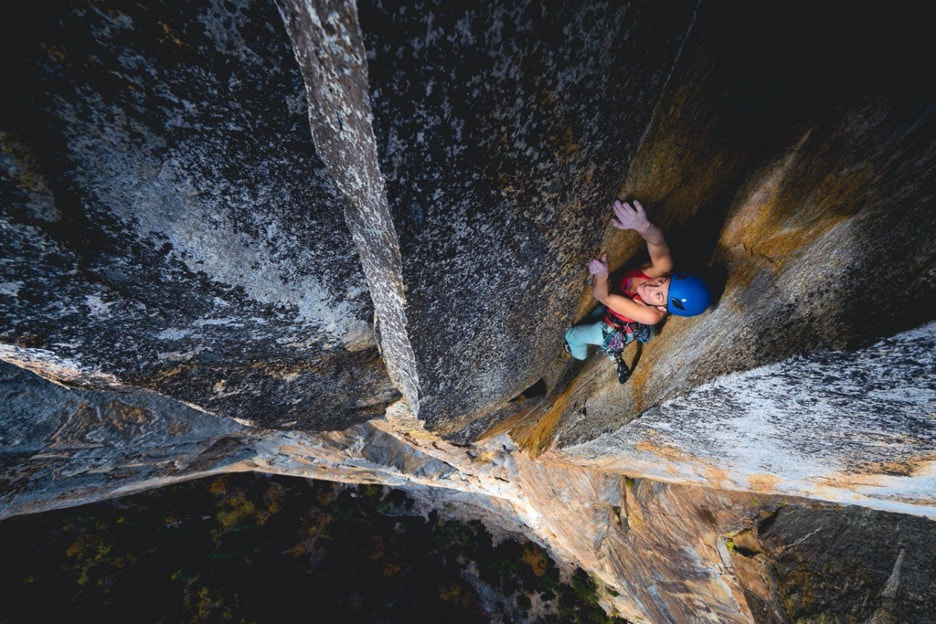 Josie McKee on "Crucifix" (5.11c) in Yosemite, California. (Photo Credit: Drew Smith, IG: _drew_smith_)
Little did Josie know, this "conclusion" was about be put to an ultimate test.

In October 2017, Josie and her friend, Quinn Brett, were heading out to speed climb the Nose. It was just days after the deaths of Hayden Kennedy and Inge Perkins, and for a few reasons, both Quinn and Josie were feeling a bit off.

Josie remembers not sleeping very well the night before, having a night of bad dreams, and feeling nervous going up to the climb. But, she said, “climbing the Nose is always scary,” so it was hard to call off the adventure just for what may have been some pre-climb anxiety.

Once on the climb, the two were in what Josie would call a “flow” state. They were feeling fully present, focused, and moving efficiently. She says they were probably heading towards a sub-6-hour Nose time, climbing faster than ever before.

The two were extremely proficient climbers, taking some very extreme risks. Speed climbing can require running out pitches to the point where a person is practically free-soloing. It often involves “no fall zones,” where a fall would cause serious injury.

Quinn was run out - over 50 feet since her last piece of gear - on a pitch of 5.10 crack. While the climbing wasn't hard for Quinn, things do happen. She suddenly fell over 100 feet, landing on the boulders behind Texas Flake.

Josie was the first to respond. She saw Quinn gasping for breath and thought “she's probably dying on me.”

Quinn was not dying and the rescue was actually the most efficient Josie had ever seen, Quinn was off the mountain in under three hours. However, Quinn is unlikely to ever walk again. She is now paralyzed from the waist down. For someone to go from being a pro climber to not being able to complete the “mundane tasks of daily life” independently, was, and continues to be, devastating (An Accidental Life) for Quinn. The emotional effects of this incident on Josie were also immense.

Josie stopped doing anything “big” for a solid four months. She took to single-pitch routes and found herself breaking down and crying on toprope. The fear and visions of falling were welded into her mind. Nightmares about the accident were frequent and Josie constantly questioned whether pulling Quinn out of the boulders had saved her life or caused her paralysis. Josie also questioned, could she still climb?
​Josie connected with the the cool crisp air and the shadows on the mountains as they morphed from silhouettes to an impressive 3-D horizon line. The hollow sound of the wind coursed through valleys and across the open spaces. She remembers stopping to watch, to take it all in; something that people who have serious objectives don't always give themselves the time for.

Her friends even caught up to her and questioned her leisurely frame of mind. “I was just going to have a good day in the mountains,” she said. If she ended up bailing and swimming in an alpine lake instead, then that's what she would do.

One of Josie's favorite quotes is “You climb the mountain in an equilibrium between restlessness and exhaustion. Then, when you are no longer thinking ahead, each footstep isn't just a means to an end but a unique event in itself,” Robert Pirsig, Zen and the Art of Motorcycle Maintenance (CGF interview).

That day in the mountains, for the first time since Quinn's accident, she deeply enjoyed the entirety of about 3,000 ft of beautiful, alpine granite that is The Cirque Traverse. But more importantly, she was fully present in her body, moving through a beautiful landscape, and deeply experienced her love of climbing.

Today Josie has found sport climbing to be a source of try-hard joy on the rocks with lower consequences. She uses it as training for bigger alpine objectives, while also as a mental break from pushing herself on gear.

She currently resides in Lander, WY, with The Wind River Range making up the horizon and Sinks Canyon, a popular sport climbing crag, in her backyard. She says, ironically, that pulling on the limestone pockets that make up climbing in Sinks Canyon is very similar to pulling on the thumb loop of cams while aiding through moves - a technique speed climbers use a lot.

Josie says that sport climbing, along with some gym training, is making her stronger and feel more ready for bigger and harder objectives. She is certainly not done pushing herself on the big stuff, she's just going at it in a more sustainable way. 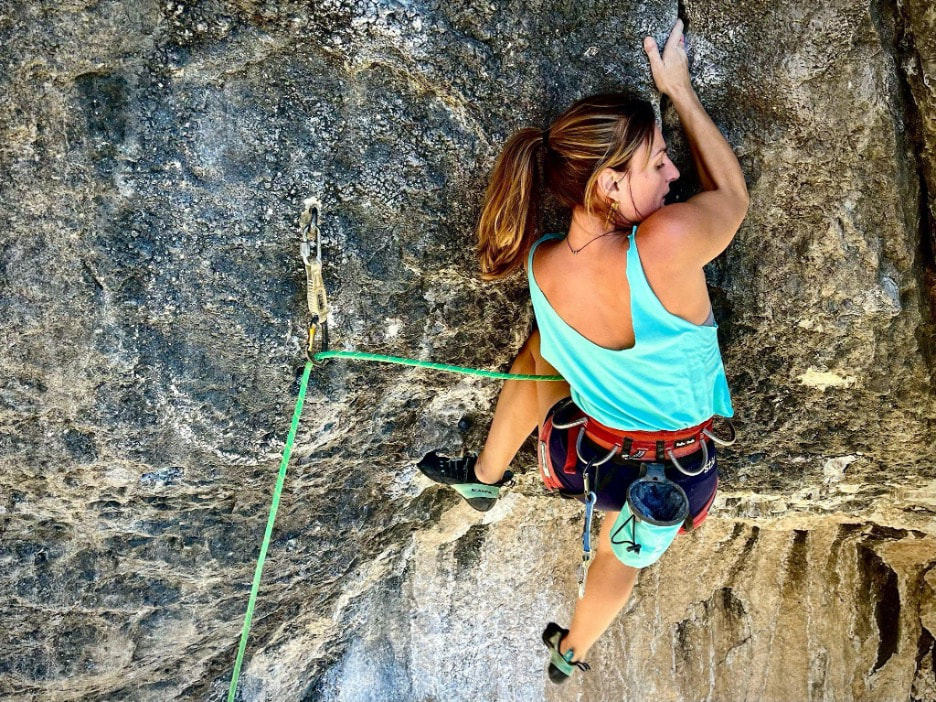 Josie McKee on "Bush Doctor"(5.12a) in Sinks Canyon, Wyoming (Photo Credit: Rya Sipe, IG: pocketsizesasquatch)
In the in-between moments, Josie is offering mindset coaching, both virtually and in-person, with self-paced options and 1:1 sessions, as well as classes at events. She says that she often sees very dedicated climbers who need a reminder of why they climb and train. Climbing becomes more like work when we don't know why we keep doing it.

She also helps people recognize their reaction patterns to the fear of falling.

What I like most about her work is that she takes what some people consider “masochistic” or “obsessive” and turns it back into something vibrant, meaningful, and fun. Her answer isn't to cut these things out of our lives, but to delve into the story behind it all.

​I think it can be hard to find someone that we trust to understand our motivations and fears.

Anyone who has devoted a lot of time to climbing can attest that the journey is very personal. Her compassion for others and incredibly respectable climbing career bring a deep and unique angle to coaching.

Since meeting Josie  out in the mountains years ago, I reconnected with her recently because the positive energy from her Instagram was inspiring and infectious. It sparked curiousity in me about this new program she had created. Perhaps I was drawn to it because I needed a reminder regarding why I was putting in the hours I do at the gym and outside. 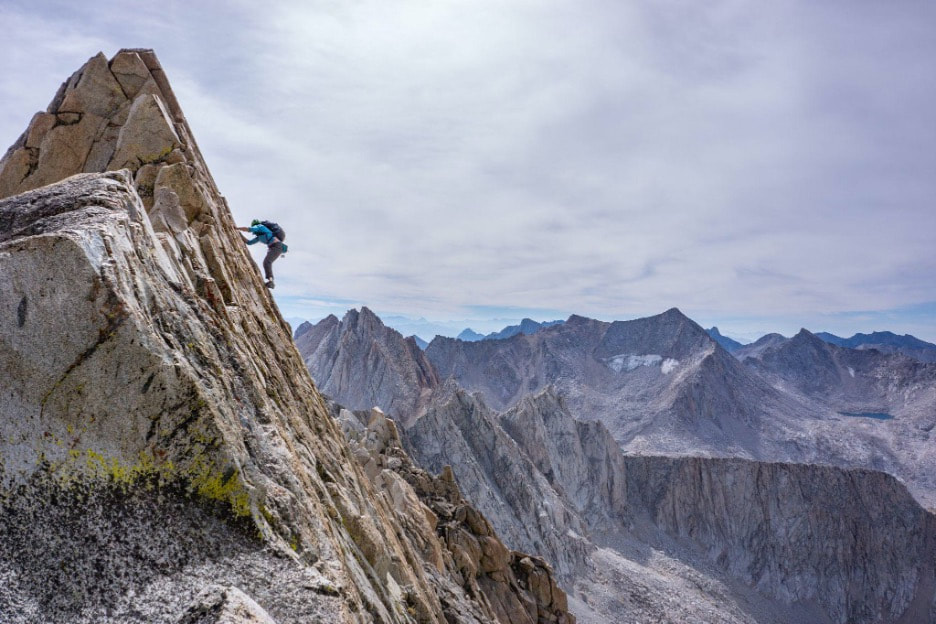 Josie McKee on "Evolution Traverse" (5.9) on Mt Darwin in the High Sierra of California. (Photo Credit: Drew Smith, IG: @_drew_smith_)
Josie's mindset coaching has helped me to slow down and find more joy in the climbing process and inspired me to believe I'm capable of not just completing bigger objectives, but enjoying them more than I ever have. It has empowered me to continue to be playful and present at the crag, whether or not I am climbing my hardest that day. It has dug up every positive motivation I have had towards climbing and put them at the forefront of my mind while I am on the wall.

Mindset coaching has been a way for Josie to share her joy of climbing - a joy that was heavily tested by Quinn's accident. But a joy that prevailed and became stronger because of it. It is a joy of trying hard, challenging oneself, and moving fluidly in the vertical environment. It is youthful voice of positivity, self acceptance, and playfulness, that I think we all sometimes need a reminder of. It is her way of sharing the energy that drives her to complete incredible endeavors, with anyone who is willing to listen and grow. 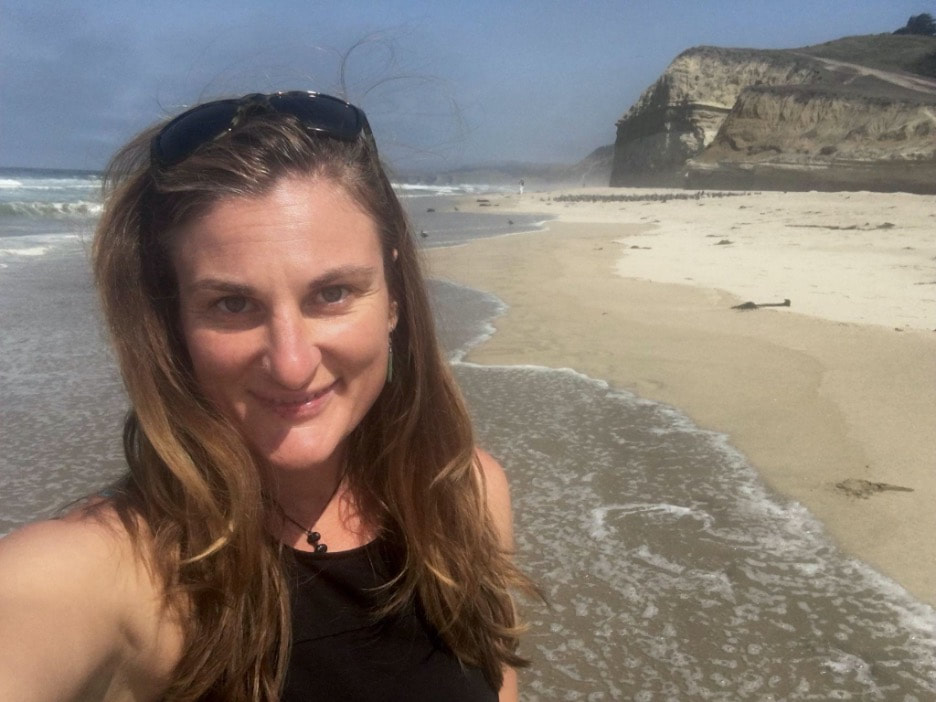 About the Author: Kaybe Loughran