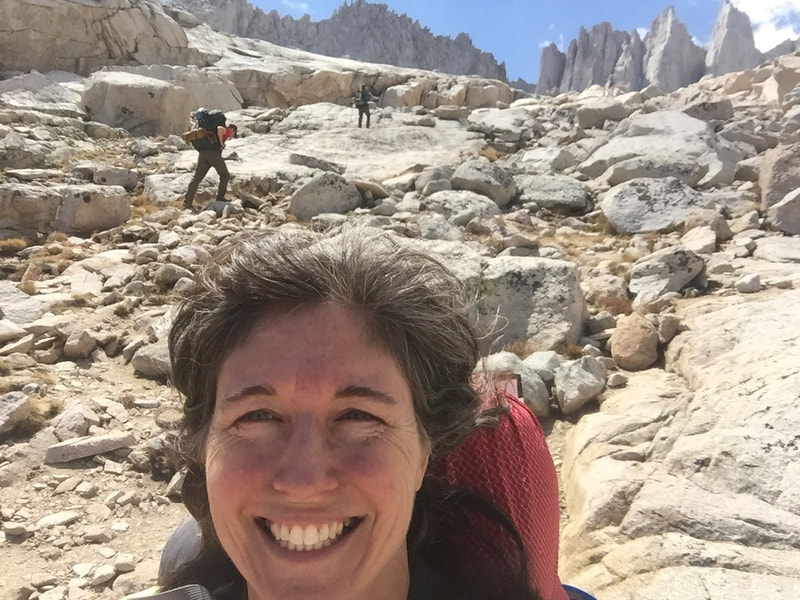 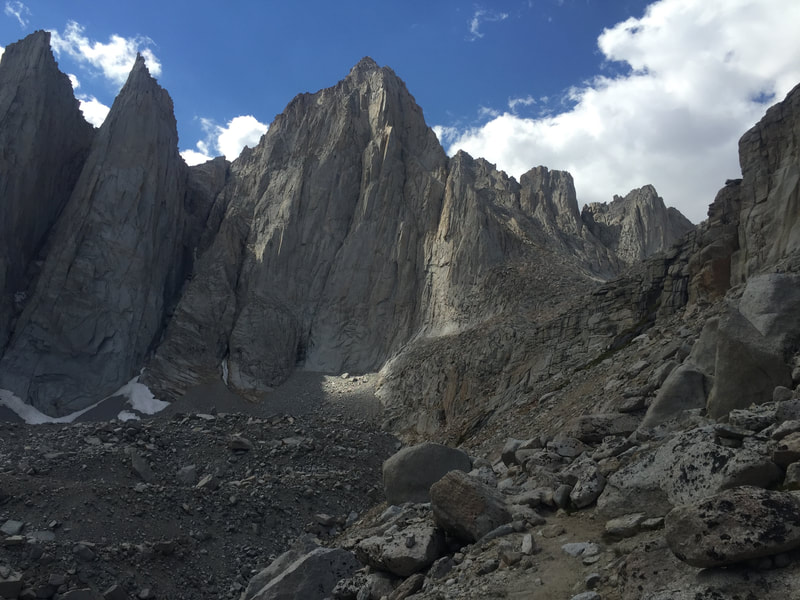 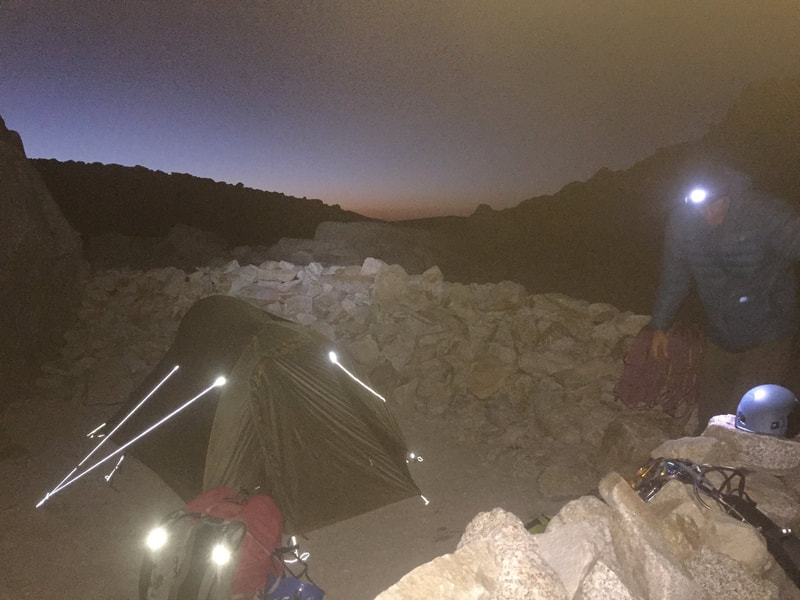 A lot of people climb Mt. Whitney, the tallest peak in the continental U.S. (14,505 feet). So much so that permits can be a challenge to obtain. Most climb Whitney via the hikers trail. Others go up the steep scree-fest that is the Mountaineers route. Still others do it via the technical East Face or East Buttress.

To boot, some climb Whitney, including the technical climbs, in a day. They assemble the least amount of gear necessary, park at the portal, ascend 4000’ to the base, climb either the East Face or East Buttress 1000’ to an elevation of 14,505’, descend the 2000’ Mountaineer’s 3rd and 4th class scree-fest, then hike back over 4 knee-busting miles down to the portal.

This blows my mind. Even with the ultra-light approach, this is beyond the common climber (well, at least, far beyond me). Although I recognize that Whitney in a day is extra-ordinary, the fact that people regularly do it allows the thought to enter the mind, if even for a flash, “maybe it’s easier than it seems.”

Having done the climb, I found that Whitney is easy and it’s not easy. I also found it should not be underestimated.
I completed Mt. Whitney. I am proud of it, had fun, and grateful, I got down safely. But, I also got whipped.

When I planned for Whitney, I reminded myself of the primary take-home message from a Mt. Ogden alpine practice - allow more time. So, we built in time – time to acclimate before hand, time to decompress and rest before returning to the portal (although, as you read on you will see circumstances eliminated that), and, on the day of the climb, we got a before-sunrise start.

We figured the climb would take no more than 6 hours, the upper estimate on the Supertopo guide. Or, if we allowed an hour for each 100 feet of the climb, that would be 10 hours, topping out at around 5 p.m. (leaving two hours of full sun for a 1-2 hour descent). That seemed like a reasonable and conservative estimate.

In reality, time got stripped away with each rest, each photo, each lead switch, each attempt at route-finding (big time sink), each caught nut or cam, and waiting for other climbers go or pass us (another big time sink). (Mt. Whitney, we discovered, is a super-highway. I have never climbed with so many people on one route before. Honestly, it was stressful to have climbers breathing down our necks. I wanted to enjoy the climb, not feel rushed or pressured. So, we decided to let the others near us pass.)

But, still, all of the moments added up and we topped out at 7 p.m. - sunset - 12 long hours after we started.

After summiting we tried to find the Mountaineers Route to descend. There were scattered cairns, and rocks made into X’s. We peeked over the edge of each marking and said to ourselves, “this looks bad.” As the light disappeared and the temperature dropped, we realized the safest choice would be to bivy on the summit.

The summit hut, with its rock walls and wooden floor, was the best option to protect us from the freezing ground and the rapidly stirring winds. We did not plan for a bivy. We had our clothing layers from the morning, tiny remnants of food, and dwindling water. Some kind-soul left an emergency blanket in the hut and the three of us huddled together beneath its noisy reflective material. The blanket helped some, but I shivered from cold and exhaustion all night long.

Approximately 40-minutes after settling into the hut, we heard voices and saw headlamps. We went outside and investigated, greeting two more climbers with a hoorah as they pulled over the ledge. They joined us in the hut. Thirty minutes later, the door opened, and two more climbers entered. They had all come off the East Face route. Not long after, another two, having just completed the East Buttress, opened the door, chatted briefly, then moved on to attempt Mountaineers in the dark. Seven of us squeezed onto the hard hut floor and tried to rest. One snored - probably the only one who slept.

Before the other climbers’ arrivals, I felt grateful that we completed the climb but slightly deflated that we were so off on our time. I wondered, “How could we have done this differently?” I traced each step and came to the same conclusion: Given what we knew then, not much. It was our first time ever on this mountain. We chose safety. We chose enjoyment, rather than the stress of squeezing into uncomfortable belay stances with multiple groups or stepping over other’s gear placements. We chose the path that looked best given little information. But it nagged me that, as an often slow climber, perhaps I was a time sink. Maybe I should not have lead any of the pitches (I lead 5 of the 12 pitches we did. We ended up with more pitches because of the dead-end route finding at the top and the need to protect short-steep 5th class sections).

When the other climbers arrived in the hut, it forced a shift in my thinking. We were not the only ones who took a long time to get up Whitney. In fact, probably half of the climbers on the routes took longer than we did. The common denominators of all of the climbers that summited late were: (1) we were all first-timers and; (2) we were all dumbfounded by the mazy mess of the last 2-4 pitches. No, Whitney in a day is not the norm.

The next morning we “woke” with the dawn and noise from summiting hikers. We tried again to find Mountaineer’s Route - still no luck. Instead, one of our team members, Simon, found a steep scree path on the northwest side of the mountain. From above, it looked as though there were human-made paths (either that or they were from large tumbling boulders). We decided to try that route. I found myself sliding on the verge of controllability. Large rocks rolled in front of me, gained momentum, then disappeared into a steeper horizon, their crashes echoing.

I froze and began sobbing from utter exhaustion and fear. I can’t do this. Every part of my being said no. All I could think of was one write up about people dying on an alternative descent route – falling into the small alpine lakes below. Was this that route? Simon, who was further down and off to my left, reassured me that the route he was following looked no worse than what we were currently on. I wanted to believe him, but I knew that I had reached my wits-end. I was concerned I would only slow them down and that my state of mind could cause mistakes. I told my husband, Rick, to give me his spare gear (to help lighten their load), and I was going to climb back up and walk down the hiker’s route.

Understandably, Rick was not happy with the decision. For multiple reasons, splitting up was far from ideal. But he agreed. One problem with this scenario was that the hiker’s route was completely on the other side of the mountain and did not access Iceberg Lake. In fact, it joined with the Lone Pine Creek trail (the trail to Iceberg Lake) less than a mile from the parking. The Whitney hiker’s trail was a long 11+ bun-busting miles down 6,100 feet and, if I were to go back to our basecamp, the Lone Pine Creek would be another 4+ miles ascending 4000 feet. Considering the circumstances - no sleep, no food, an arduous two days of hiking and climbing - it was not feasible for me to meet them at Iceberg that day. I was willing to sleep in the car and go up the next day, but Rick decided they would pack up camp and meet me at the car. I hoped this would work.

Once on the hikers trail, it's relative safety provided emotional relief. Some kind people helped me with a fruit bar and some water. I was functioning on reserves, but walked almost non-stop, with one half-hour rest and a micro-nap in the sun. When my mind wandered I worried about Simon and Rick, hoping they succeeded, unhurt, in their risky excursion. The Whitney trail stretched on and my knees and toes felt the pounding (but surprisingly my legs did not get as rubbery as they did after the Mt. Ogden adventure). Then, the Whitney Portal valley appeared. As I passed the Lone Pine Creek trailhead, I saw Rick running towards me (running with his 50+ pound pack still on!). Amazingly we hit the intersection at the same time!

Rick and Simon found a viable descent that took less time than the Mountaineer’s route. They arrived at Iceberg Lake camp the same time as the other group who left earlier on Mountaineers. Rick and Simon said there were some sections with “consequences,” but they were avoidable (although they emphasized this is not a good route if there is any risk of ice). In addition, the steepness did not get worse than where I had my melt-down. Rick and Simon were able to eat lunch, pack camp, and walk back in the same time it took me to descend the Whitney hikers trial with little rest.

I felt grateful to Rick for carrying the extra load of camping gear, which was previously split between us. I felt grateful my teammates were willing to meet me, cutting our Whitney outing short by at least a day. They were completely understanding and supportive of my decision and informed me that the thought of beer and a burger was plenty motivational to get off the mountain. 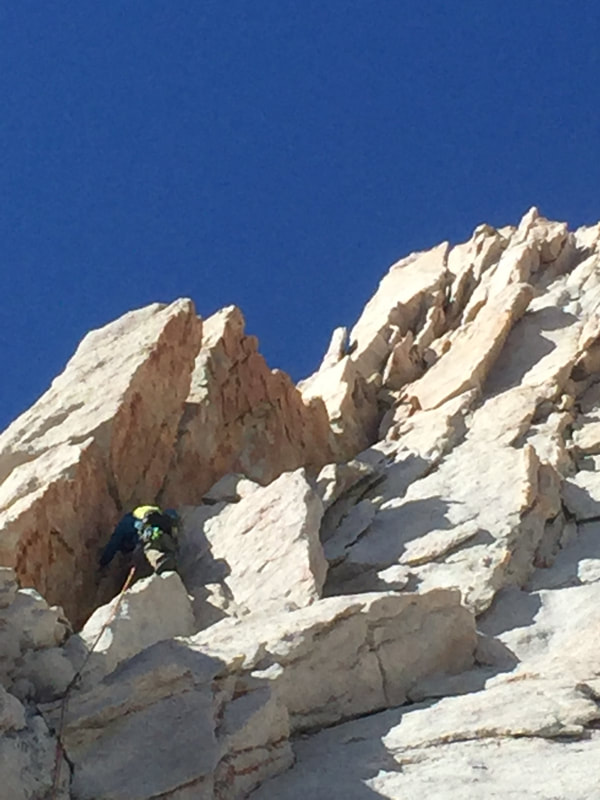 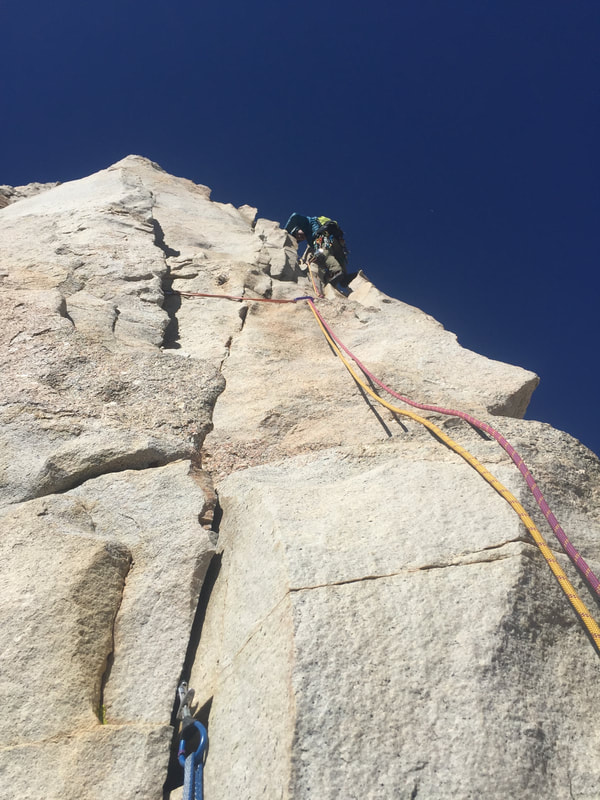 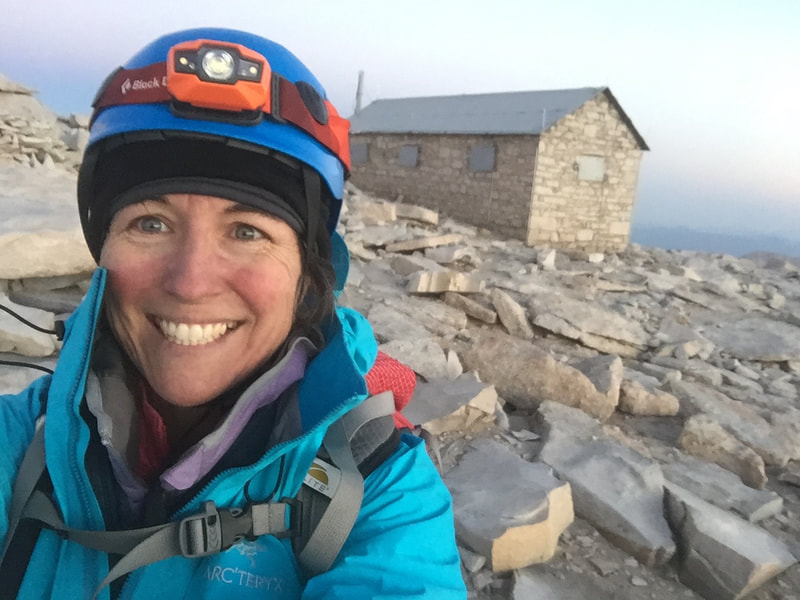 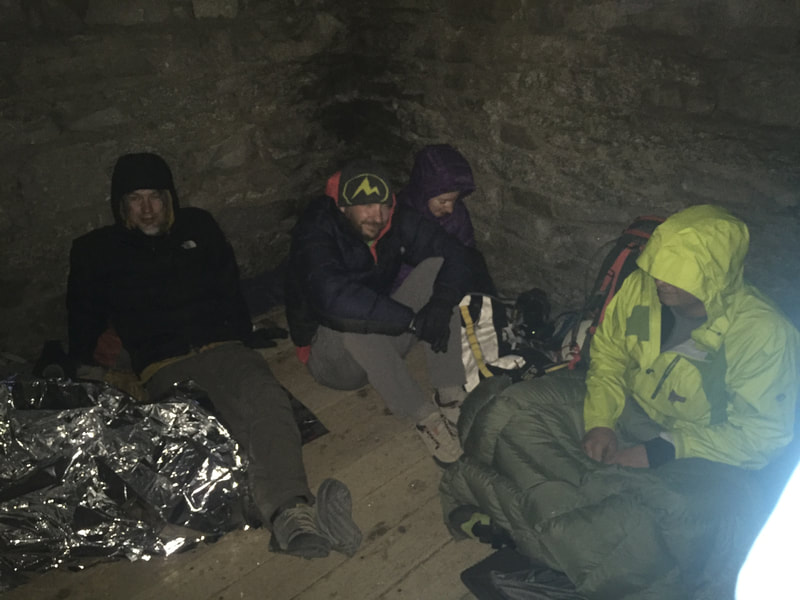