I Am My Father's Son:
​Layton Bridwell

By Dave Barnes
Many men have grown up in the shadow of, or whittled their character down to, the likeness of their father. Jim Bridwell (aka. The Bird) was not only a kick-ass climber and a member of the Stone Masters (A crew of 1970’s and 80’s Yosemite rock climbers that emancipated aid climbs from the previous era and pushed the limits even further), he was a father. Jim's son is named, Layton, after Layton Kor, a climbing mentor of Jim’s. Jim had a lot of achievements but for him, his son was the best of them.
​“Heh Dave, look at this....” Layton panned his cell phone to the side and focused on an item. “Whoa. This is the legendary hammer my pop used on the Moose’s Tooth.” Jim climbed this peak in 1981. The Moose’s Tooth rises to 10,335 feet near the entrance to Alaska’s Ruth Gorge. The axe that Layton was showing me was used by Jim and Mugs Stump on a route they named, The Dance of the Woo-Li Masters (VI 5.9 A4 WI4+; 5,000 feet in length). When Jim spoke of the route he called it, “A blinding, freezing torrent of misery.” The route was extreme and was completed with a sprinkling of fairy dust luck coupled with two brains and eight limbs of rock solid mountain skills.

​I was listening to the tone of Layton’s voice. I could hear the pride in his father’s achievements, but it was a weird set of objects that now lit up his octaves. “See these carvings?” He showed me some dark, wooden, jungle Pigmy thingy his dad brought back from Borneo.” He then shared with me that his dad’s 1980 Borneo expedition was badass and Layton preceded to show me his tattoo, the exact same native image that his father had the Pigmies carve into him in that Borneo jungle. The reason for his father’s death was complications arising from Hepatitis C. Jim always reckoned he contracted the disease whilst getting that tattoo. The tattoo became a connection of a son to his father.
“You know Dave, people were coming to see Pop, even when he was really unwell wanting stuff from him. Pop knew where he was at and gave away items as well.”

​That is the way with history, it can get lost in the keeping and perish in private collections. Layton and I chatted about Valley stalwarts, Ken Yager and Dean Fidelman who are setting up a Museum devoted to Yosemite Climbing. We made sure they were informed of Jim’s collection. Layton knew these guys and welcomed their inquiries.

Jim kept a lot of everything, not quite a hoarder but a just-in-caser. Amongst the paper piles are scribbled notes of Patagonia, there are random thoughts of climbing moments in exotic places loosely filed, as well as new routes in forgotten recesses of the Sierra Nevada. Jim was a believer in using paper to record his adventures. Computers, Bah.

While he never got social media and didn’t really care for it, this was not true of the written word. There is a trove of his free hand and ink typed writings left unread in Jim’s shed for future climbers seeking to ignite fresh adventures from the ashes of past legends. Resting on top of a box, Jim had an unfinished El Capitan mega route topo. Buried beneath it was one of Layton’s school reports from Boreal High (I kid you not). There it was a symbol for Layton from his dad, the two wings of The Bird, one of climbing and the other of family.
​
​Jim recorded in his notes a time in 1979 when he was making his way down after completing the 2nd ascent of the Compressor Route, Alpine Style, in Patagonia. He had taken a 150-foot whipper smashing some ribs, teeth, and chipping an elbow. It was dire. He realised that his actions could expose his family.

“Suddenly panic: the hammer loop ripped apart and I seemed to watch myself fall, an odd, flailing figure silhouetted against the snow. Then--wham—I reached the end of the rope, and it seemed to stretch forever. There was time for a thousand thoughts, about my new wife, Peggy, on the East Coast, serving up breakfasts at Micky D's to help pay for my adventure (and Lord knows she doesn't do mornings) and will I see my unborn child?”
Layton’s Mom and Jim’s widow, Peggy came from a Hungarian Gypsy family and (as was in her blood) ran away to see the world and found Jim Bridwell along on the way. He turned out to be adventure enough for her and they settled into a life of nomadic climbing, living for the moment, and of course her falling pregnant. Peggy’s pregnancy corresponded with Jim’s Cerro Torre Expedition in 1979 where he was juggling this world and the next on the Compressor Route. He made it home - just. Layton takes up the tale.

“Well I have learned through campfires, that mom was in labour at Tahoe Forest Hospital in Truckee, California. Pop was taking acid with a friend, Kim Mc Kinney out the front and traversing the rock walls of the hospital.” [It turns out that Jim and Layton share the same birthday.]

Growing up as a child on the climbing fringe made its impressions on his friends’ families. Layton shared that once Jim invited some of his school buddies and their dads to go climbing up around Tahoe.

“My friends and their dads thought, OMG. One time dad took us out into the hills and was bouncing from one giant rock to another and these guys were thinking that my dad was certifiable, but heh, that’s Pops.”
The family life of a Stone Masters son was no different to many of us, his mom and dad fought but whose folks haven’t? He did want to share that Peggy and Jim were Mr. & Mrs. Ying and Yang in a retro kind of way.
​
“They were doomed for each other. Like Peggy and Al Bundy [a reference to the Married With Children TV sit-com], they both laughed a lot too. Mom had her moments and even though dad was quietly spoken he would blow up at times. Even so mom loved him entirely.”

Growing up with a jet setting climbing guru is rock and ice. There was an empty chair at the family dining table that couldn’t be reclaimed. The Bird flew through the 80’s and 90’s completing expeditions to South America, Nepal, throughout North America and across to Europe to conquer the Eiger and Mount Blanc. As the years went by his father’s stories wore thin but Layton [and Peggy] believed in him.

​“Climbing took my dad away from me a lot. Sometimes when he went away I didn’t know if he was coming back.  However, on each return, my show and tell at school was pretty killer.”

Sometimes he and his Mom accompanied Jim and other times Layton was left at home and his friends would come and stay. Layton and his friends took care of the house, paid the bills and the neighbours looked out for him, well sort of.

“Once my parents came home and I was asleep on the carpet with a tattoo that I didn’t know about, there was a half a box of cereal in the pantry, a pickle in a bottle, and a carton of beer in the fridge.” His dad wasn’t happy but either was Layton at this time.

Sometimes the Bridwells went on family trips, like when Jim was a rigger working on the Sylvester Stallone blockbuster action flick, Cliffhanger in The Dolomites of Europe. Layton enjoyed this time.

“Over there we stayed with renowned climbers, but our favorite was hanging out with Aunty Lynne.” Lynne Hill lived in the South of France for a number of years. “Lynne looked after us.”
Jim kept climbing but Layton found punk rock and art and began to forge his own path.

​As Layton went off to work one of his father’s climbing genes had matured within him. Layton melded his love of the arts with his knowledge of climbing that had been passed on by his father. He became a rigger and today he works for Hollywood, builds roads, does whatever work is on offer but his first love is the arts.

“I want to get back to the arts.” He said. “I do all kinds of painting, pottery, design. Whatever I have lying around in the garage I can use to be creative.”

Layton has a beautiful portrait of his dad that he painted, Jim loved it and so does he. Layton believes it captures the spirit of the man. 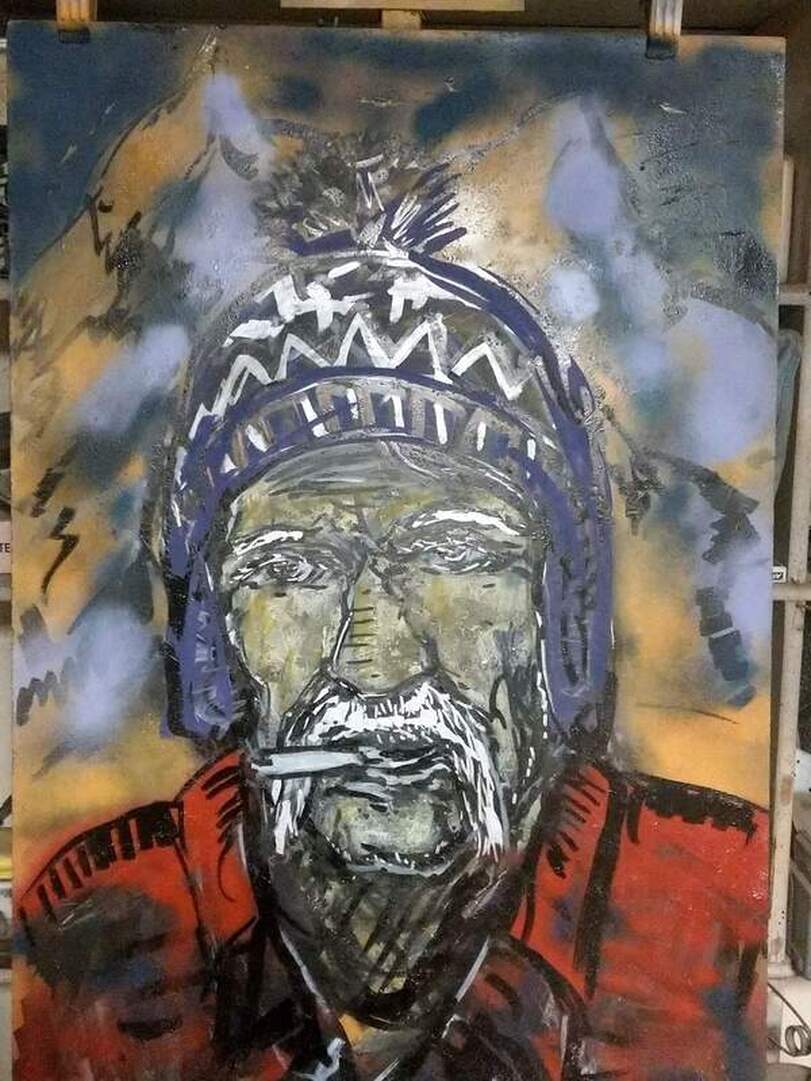 Portrait of Jim Bridwell painted by son Layton Bridwell.
​Layton also knows there is work still to be done to lay his dad’s memory to rest. His home remains crowded with the tangible remnants of The Bird’s climbing life. He knows it is important to find a nest for his father’s feathers.

“Maybe I could finish some of the things works he was working on?” He showed me the incomplete writings of the first ascent of Zenyata Mendata, a route on El Capitan which his dad completed with Peter Mayfield and Charlie Row in 1981 (5.7 A4 VI). This climb was hardcore then and remains hardcore now even with modern wall gear.

“Yeah, that would be kind of cool,” I replied. We finished the conversation with Layton wanting to ensure his father’s legacy was not made into some hero-worshipping thing for his father’s fans and he was adamant that climbing hagiography just wasn’t his dad’s deal. To his son, Jim was a hard player but a thoughtful one. Jim would be happy letting others enjoy the notoriety of those glory days of pushing the envelope, smoking grass, global adventures and blowing sweet nothings into a blue lit El Cap evening. Life was simple then and if anything, Jim had taught his son not to make it complicated now.

Thinking of our chat I thought that throughout his life, The Bird had taught his son to fly and to seek out his own thermal to take him wherever he wanted to go. As the weight of losing his father comes off Layton’s shoulders, I think that he too will find his wings and fly like The Birds before him.