Alex, you are from England, tell us about the climbing scene there. I hear mostly about difficult-to-protect, scary, gritstone.

Yep, I live in Manchester, which is right next to the Peak District and that famous gritstone. The climbing scene is super strong (in both senses of the word) around the Peak, with Sheffield being a real hub of the British scene. As for the gritstone, it’s not all difficult-to-protect and scary, most of it has lots of protection and is really good fun. You can have quick bouldering sessions close to the road or walk for miles across deserted moors to find a cliff to yourself. The reputation is because bolts aren’t allowed on the gritstone so some routes are solos or have really marginal gear, and the sculpted nature of the rock often means that it can get really hard and really scary. This does lead to some great photo opportunities though! 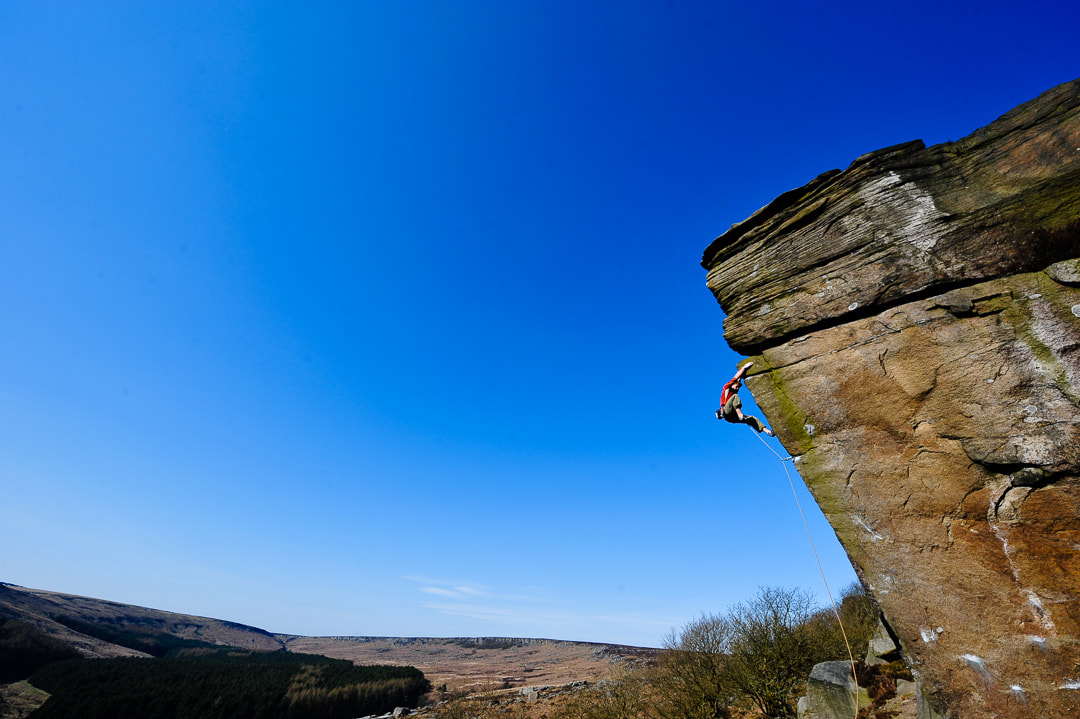 Yep, I’m a climber. I’ve been climbing for 25 years or so now, and have dabbled in most of it: from grit bouldering to sport climbing in Thailand, ice climbing in Scotland to ski touring in the Alps, trad climbing in New Zealand to via ferratta in the Dolomites. As to what what styles, I think it’s safe to say I prefer over-graded routes, somewhere nice and hot. 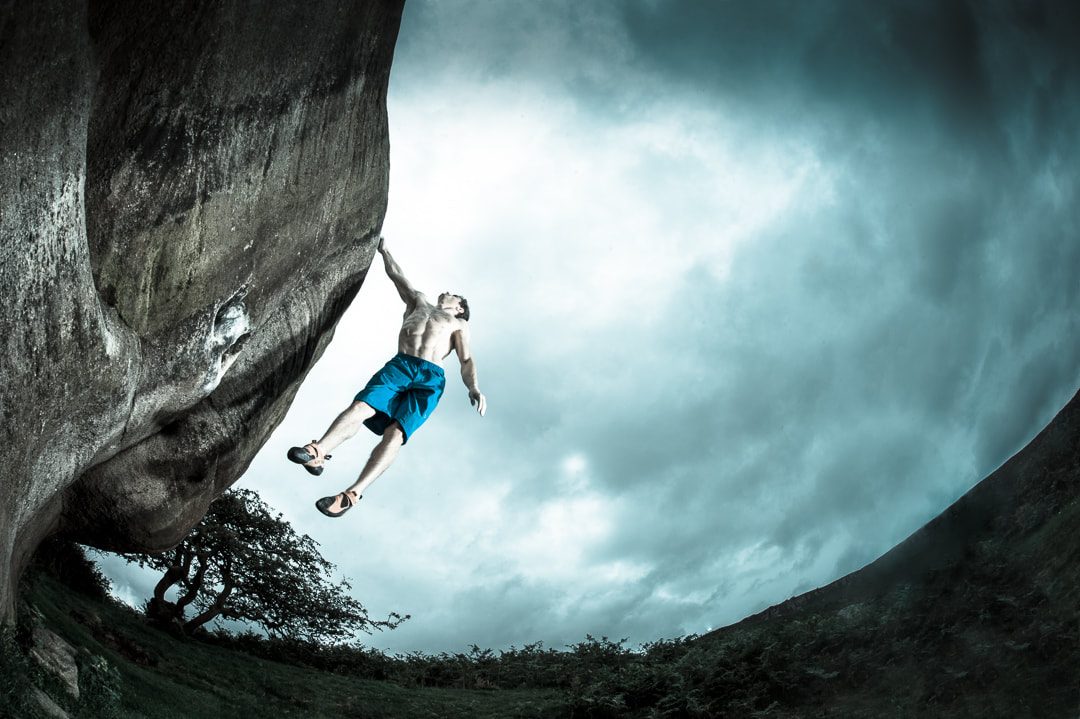 Adrian Baxter on the classic Buckstone Dyno, Stanage, Peak District
​Do you have a favorite place to climb in England and/or beyond?

In England, my desert island crag would have to be Stanage in the Peak District. I guess it’s an obvious choice, but you can go there for decades and still be discovering new climbs. Worldwide? I’m a sucker for the easy pleasures of Thai limestone, so I’d say Lao Liang island. You camp there and climb off the beach. Paradise. 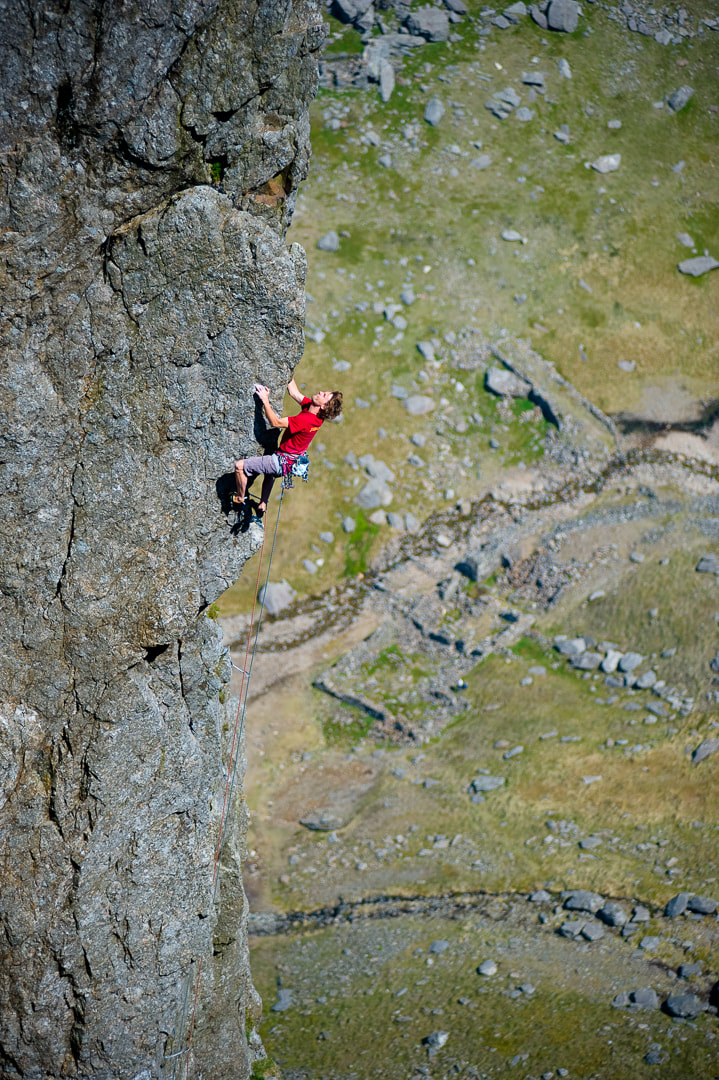 Nico Favresse climbs The Axe (E4) high on Clogwyn D’Arddhu, Snowdonia
​Do you have a favorite place to take photos of climbing in England and/or beyond? And what makes it your favorite place to photograph climbing?

Well, it’s in Wales, but there’s a rather fantastical crag called Cloggy (its full name is Clogwyn du'r Arddu) high up on the side of mount Snowdon. It’s a special occasion crag, the walk in and weather means you wouldn’t go there that often, but when you do, it’s guaranteed to be memorable: big lines, wild exposure, intimidating rock. It's a horrendous place to scramble to the top of and drop abseil lines - hoping you’re in the right place. But it's perfect when you do actually manage to get yourself in the right place at the right time.

Worldwide, take me to Bishop, California any day of the week. As the granite’s really rough, you need to rest your tips, so it’s a great place to mix up climbing and photo days. 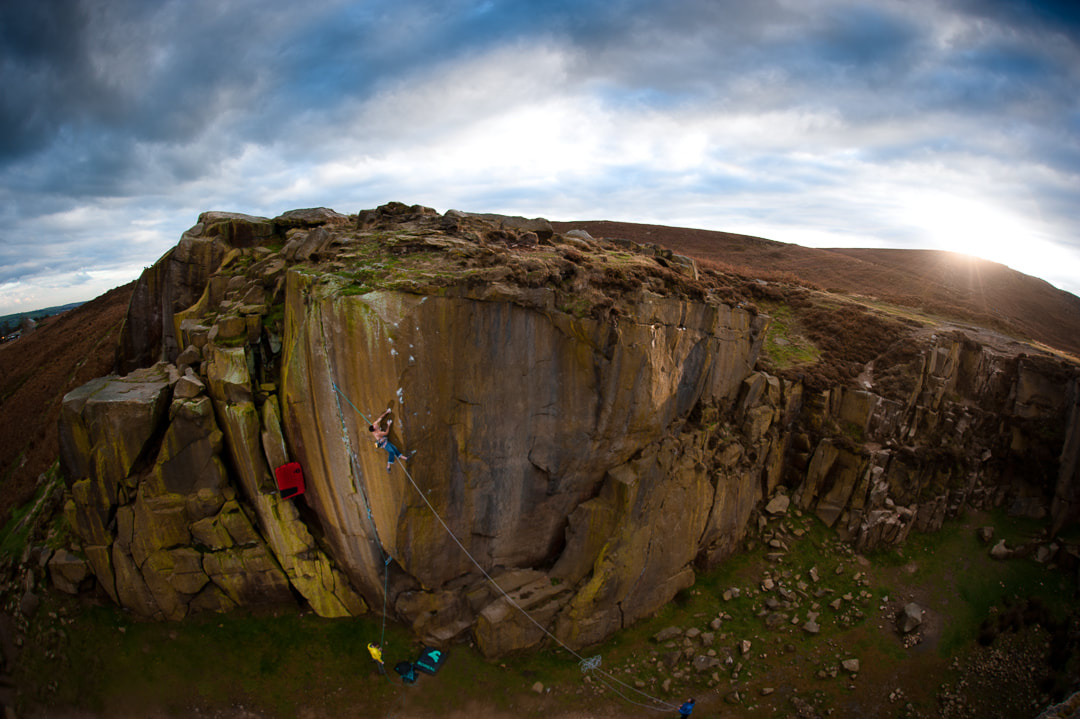 Jordan Buys climbs Loaded (E8), Ilkley Quarry, Yorkshire
​How long have you been doing photography? Tell us about your history.

I first bought an SLR (single lens reflex) in the late 90s and quickly discovered that I liked it. This was the days of film, so owning an SLR, using slide film and actually being bothered enough to abseil in for photos meant you were almost guaranteed to get published. So that was great. I’d race around the country getting as many first ascent and new route shots as I could for the magazines. I started writing to get more shots published, and evolved into a magazine editor. As slide film evolved into digital, I spent a lot of time experimenting with flashes and using remote flashes so that added a new dimension to my work. Then, as digital evolved into more social media and film, I ran the social media accounts for the BMC (British Mountaineering Council), started our platform called BMC TV and worked with lots of amazing and talented filmmakers to produce content. (Ed Note: Check it out, there are lots of great videos!) 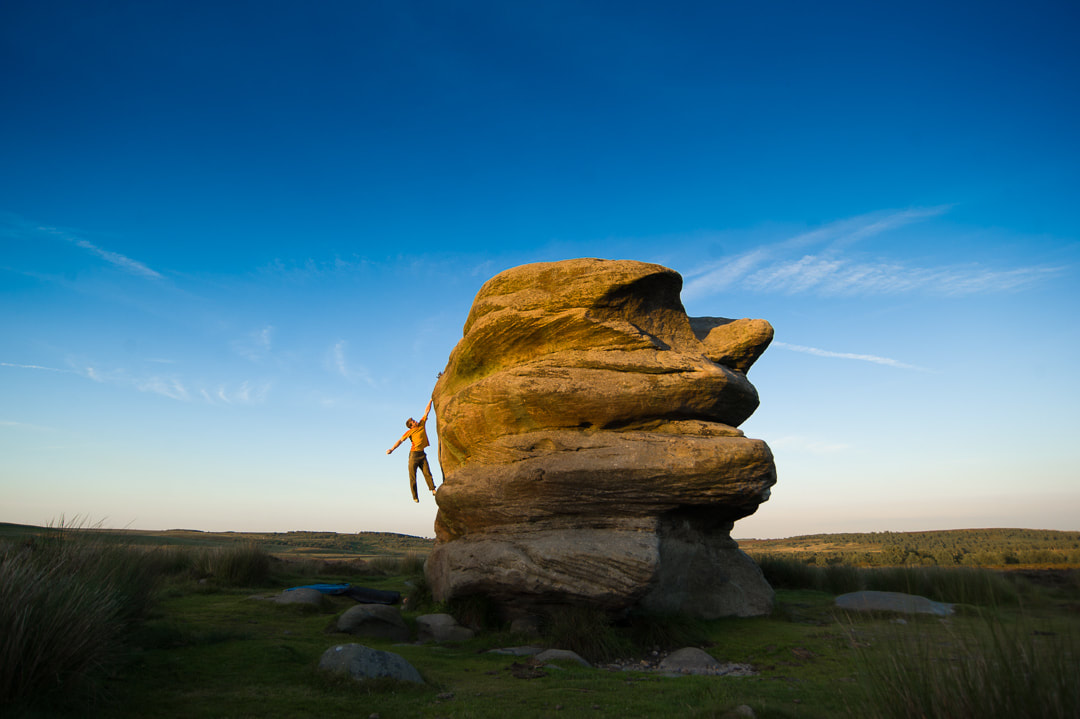 Dave Barrens bouldering at Owler Tor, Peak District
Tell us more about your work with the British Mountaineering Council.

Yep, I’m Head of Marketing and Communications here. What does that mean? I run the team that delivers all the marketing and communications for the British Mountaineering Council and the GB (Great Britain) Climbing Team. So that’s the social channels, website, content, film, our magazine, big events such as the British Bouldering Champs, film festivals, all the digital platforms that make things work, all the membership side of things, press, PR. It’s like a lot of marketing jobs: always variety, lots of new stuff to try out. It’s made a lot easier working with a great crew of people and, of course, being able to quickly use some of my own photos if we’re stuck.
Is your training/background in marketing?

It is now. I’ve got a masters in marketing strategy, so I’m fully qualified to use plenty of acronyms. If you’re into visual communication, which I guess most photographers are, then marketing can be a great fit. It’s the flip side to editorial and instead of just causing an emotion, you’re taking the next step and trying to use that emotion to get someone to do something.
What’s the CoVID quarantine and experience been like for you in England?

It’s hit the climbing community pretty hard. We’re only just starting to head out climbing again in England, but the walls are still shut. Hopefully we’ll all make it out the other side soon. 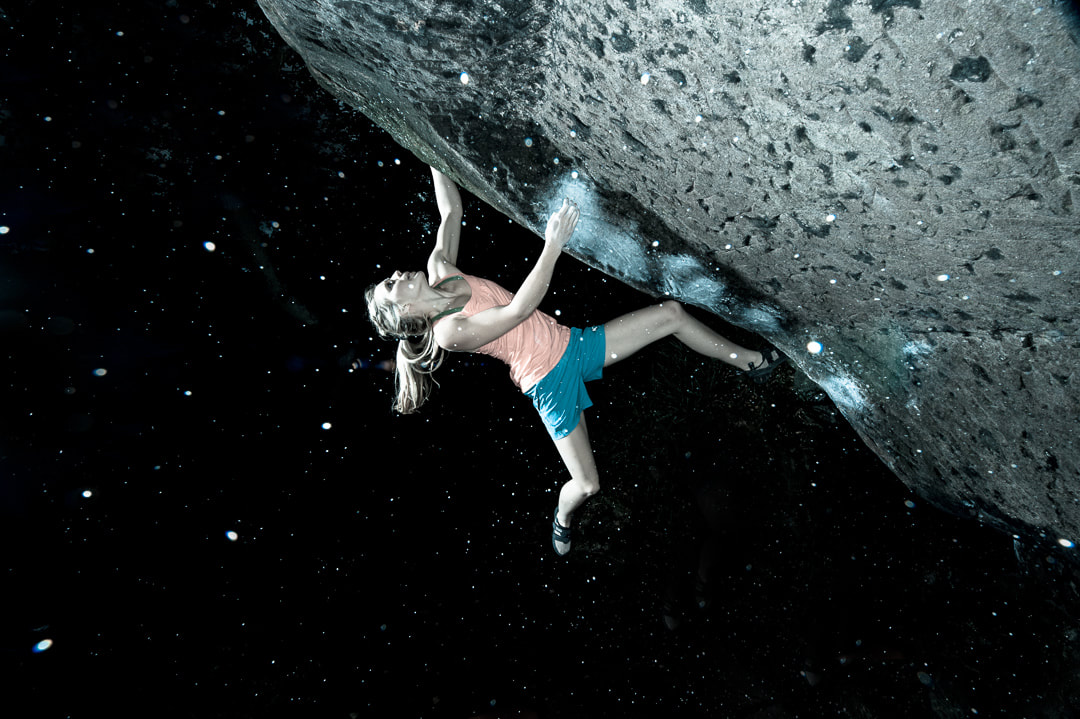 Mina Leslie-Wujastyk bouldering at Rowler Tor, Peak District
​Any words of wisdom, stories, or random thoughts you’d like to share with the Common Climber audience?

OK, here’s one: If you’re converting a campervan, buy one with straight sides not curved. It will save you 9 months of your life. 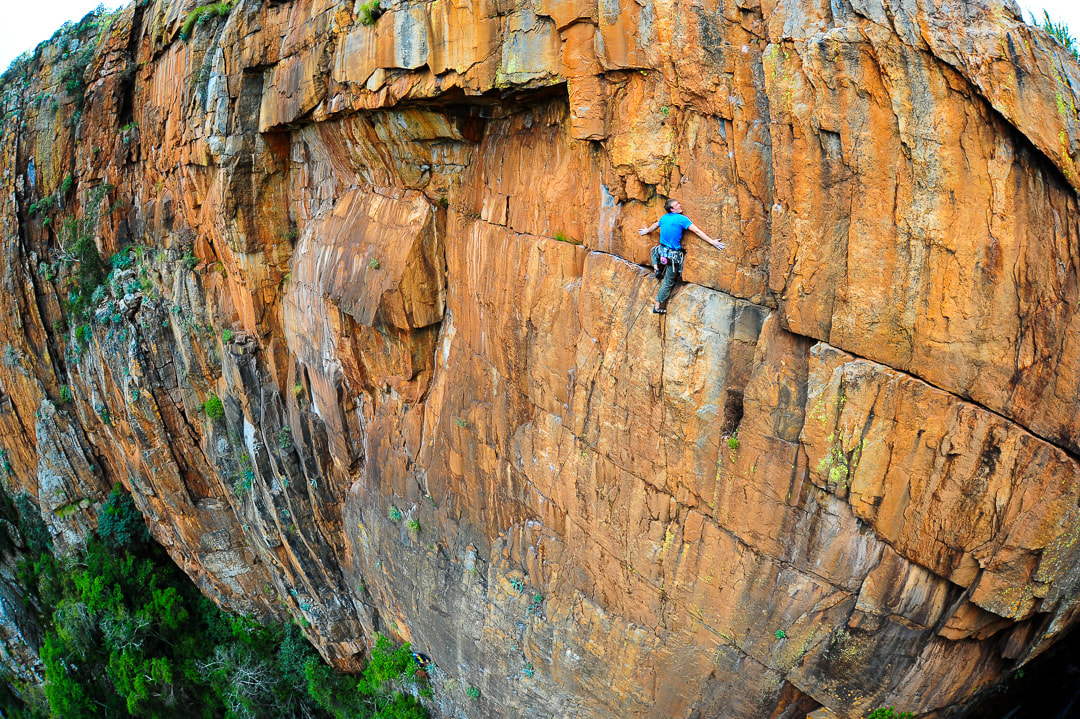