I Am a Woman:
​Brie Chartier Shares Her Transition Journey

By Stefani Dawn
June is LGBTQQIP2SAA* Pride Month, an event that blossomed over time from the Stonewall Riots that occurred in Greenwich Village, New York (and spread nationwide) in June 1969 [*see info boxes below]. I use the word blossomed because of both the colorful images of rainbow flags and celebration that we see in today's events, but also because of the time, energy, and "pushing through the dirt" it took to get to this point.

The LGBTQIA+ history is one of fighting to simply be who you are and the ability to express it and live their lives as freely as anyone. That fight is large-scale and political, but is also often reflected in the personal stories of those within the LGBTQIA community. Here, I share the emergence of climber and AMGA Single Pitch Instructor Brie Chartier into her full and open expression as a woman and her vision of being a climbing guide. 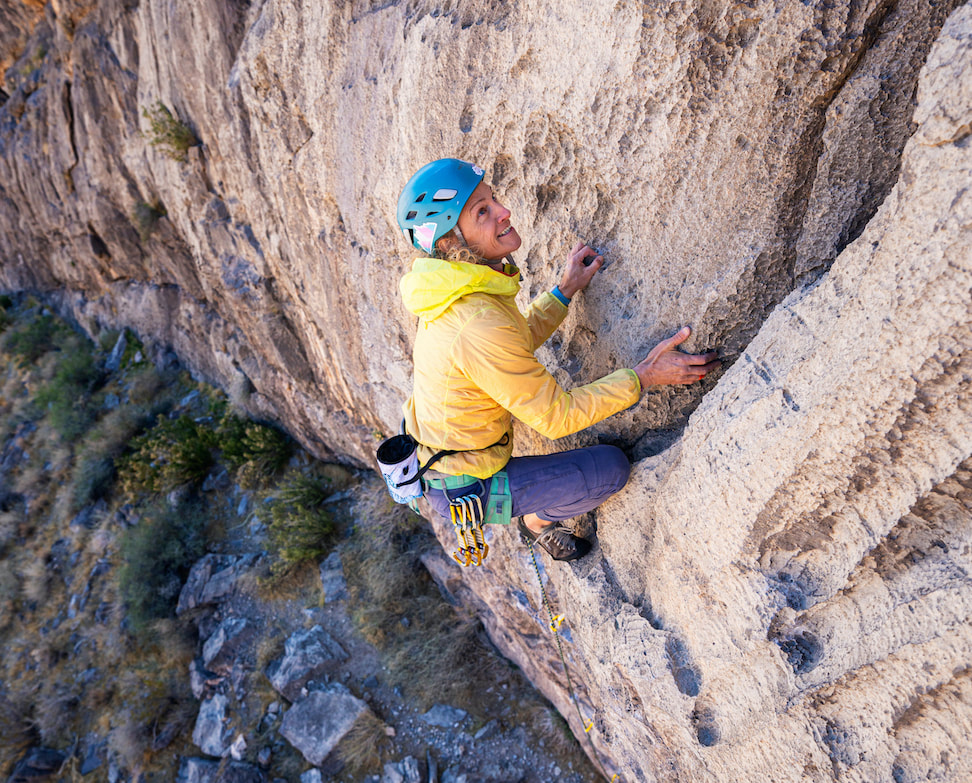 Brie climbing at The Gun Club in Las Vegas, Nevada (Photo Credit: Nikki Smith)
Climbing is certainly a place to begin with this story. Brie began climbing around 1992 in her early 20s by purchasing the John Long How to Climb series and then just doing it.

When she stared out, she had a rope, a few carabiners, a cheap harness, and a pair of high top 5.10 approach shoes that she bought on clearance. She climbed in those shoes for years working her way up to runout 5.10 slab climbing on her home crag of Wheeler Mountain in Vermont. Brie does not recommend starting out this way and acknowledges that she had more than one close call.

Thankfully, she soon found mentorship with the old guard. Every weekend she would do multi-pitch routes on the cliffs of Vermont and New Hampshire and, in the winter, the ice of Lake Willoughby which was only 10 minutes from her house. Brie soon discovered that climbing was the one place where she could escape, or quiet, her inner turmoil. For those of us who find climbing an inseparable part of our lives, we can relate to finding climbing as a resource to help us cope with, or even escape from, other aspects of our lives.

Brie's inner turmoil stemmed from the fact that from a very young age, for as long as she can remember, she has always felt like a girl. Back in the 1970s and 80s when she was growing up she experienced gender dysphoria, which is strong distress that occurs when seeing and feeling differently than your gender assigned at birth. Brie was a girl, yet her birth certificate and everyone around her said she was a boy.
It wasn't until three years ago, at the age of 44, that Brie admitted to herself that she has been living a lie her entire life. At the time, Brie's wife of ten years became pregnant. As Brie looked at the ultrasound and saw that she was having a boy, the facade she had built for so long began to crumble. She had no idea how to be a good father and could no longer pretend to be a man.

​​Brie decided to crack a window into exploring her gender. At first Brie thought she would present herself as androgenous, dressing a bit more feminine, but not a complete step into the female form. Since she was married, she wanted to protect her wife by keeping herself as close as possible to the man her wife knew. She was still convinced that she could not provide for her family as an open transgender person and was afraid of the ridicule of society. However, when Brie began to express her true gender in even the smallest way, she remembered who she really is - a woman - and she could no longer live any other way.    ​​
But Brie was sexually attracted to women. As a result, she was not eligible for surgery under those criteria. A "sex change" surgery would make her a lesbian - an unacceptable outcome for a close-minded society. Any type of transition-related health care was hard to get and extremely expensive and Brie knew she could never afford surgical help. That, in large part, contributed to her sense that she was broken and needed to hide all aspects of her transness to survive.
​​
Now though, our society better recognizes the need for people to be whole and happy, and if gender affirmation surgery is part of that equation, it is available as an option for many. When Brie discovered that she had access to gender affirming surgery through her health care she was exstatic. In January 2020, Brie had facial feminzation and in April 2021, Brie had what many trans people simply call "bottom surgery." With the help of these surgeries, Brie was able to feel safe and feel at ease in her body. For the first time in her life, she feels wholly herself.

But it's not just the gender affirmation surgery that has contributed to Brie's wholeness. It is her living her best life and expressing her passions. For example, Brie has always wanted to be a part of outdoor women's organizations, but as male-presenting, she was excluded. Once Brie began presenting herself as a woman, she was welcome in some, but not all, organizations. Brie discovered that some women's organizations had not yet fully explored or communicated their inclusion policies. Brie saw this as an opportunity to become active and engage these organizations in a conversation about the transgender spectrum and the needs of transgender people.

For example, many transgender people do not take hormones or have gender affirmation surgery, yet they are still every bit the gender with which they identify. Some may not even go as far as dressing as their gender identity - like Brie did for most of her life. Brie explains to the women's groups that she, as a male-presenting woman, desperately needed to be with and around women in the outdoors and climbing. This is because she thought, felt, and experienced life as a woman and related and interacted with women far more naturally than men. The whole point of a woman's organization is to create a safe space for women to be without judgement or a competitive environment. Brie desperately needed this space in her life but was excluded and, as a result, was stuck in a dark and lonely void.

Finding her voice in advocacy extended beyond educating outdoor women's groups. Brie stepped into two leadership roles: one, as an AMGA Single Pitch Instructor, to provide safe climbing and learning spaces for women and other under-represented groups; and, two, as the chair of a Bureau of Land Management committee for diversity, informing national policy for the Bureau and conducting training in the west and southwest region about transgender, specifically, and LGBTQIA+ more broadly. 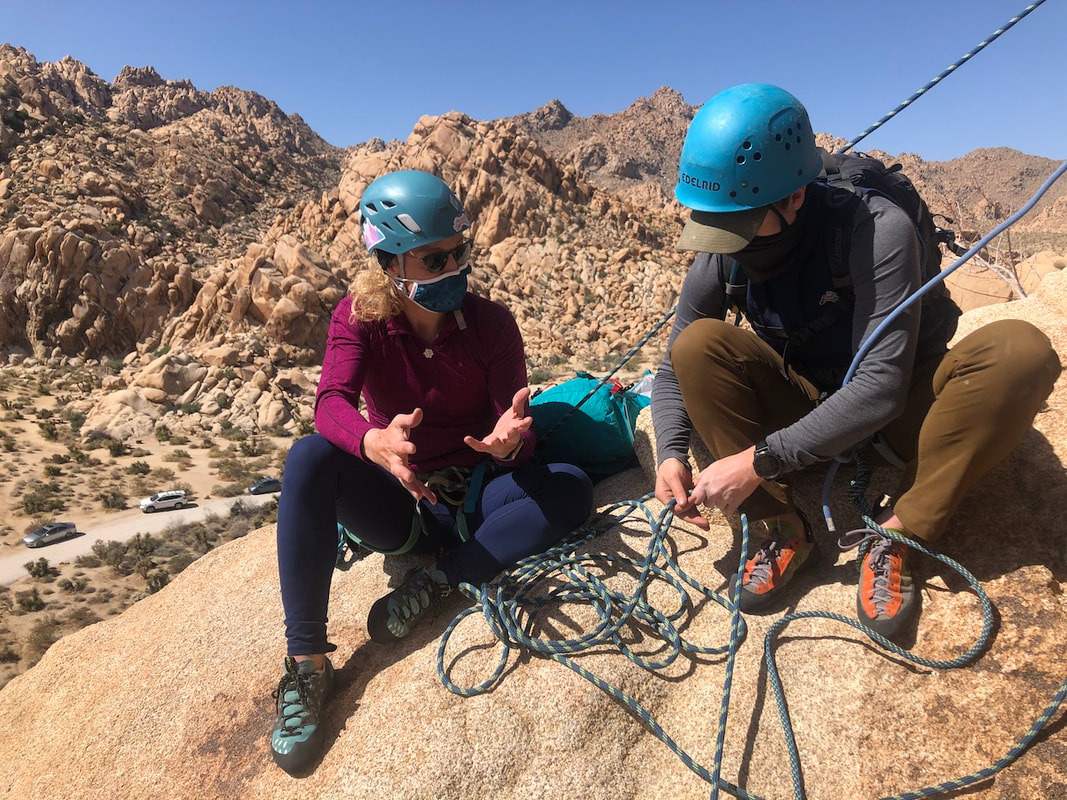 Brie shadow guiding a women’s clinic with Athena Rock Climbing. (Photo Credit: Kelly Fields)
Brie is fulfilled when she experiences perspective changes in the people she helps educate - be it a woman who feels she's not strong enough to climb and then discovers that she is; or a rural politically conservative Bureau of Land Management supervisor who had never previously met a transgender person, and then at the end of the training hugs her and says thank you for opening his eyes.

Not every transgender person wants to openly talk about their experiences or even wants people to know they are transgender. For many, the whole point is to live their lives quietly in the way that best represents them. But Brie feels a personal call to action and, as such, is expressive about her experiences of being a woman in what is traditionally seen as a man's body, and finally having      gender-affirming surgery. Brie explains, "If I have the ability to normalize the fact that there is more than one type trans person in society, I need to do it."

LGBTQQIP2SAA stands for lesbian, gay, bi-sexual, transgender, questioning, queer, intersex, pansexual, two-spirit, androgynous, and asexual. So, what do each of those terms mean? Why are there so many? And, why do letters (and now numbers) keep getting added?

The reason there are so many letters (and now numbers), and new ones keep getting added, is because LBGTQIA+ is an evolving acronym that is meant to be inclusive. The terms within the acronym express two different things - gender identity and romantic attraction.

The goal of the LGBTQQIP2SAA is to raise awareness about the diversity of humans and to openly acknowledge that diversity. If we just called these different identities and orientations "not cis/not-hetero" we would continue the dominant perspectives in our society and perpetuate an unfortunate, and even dangerous, scenario of "the other." Plus, we would never learn about all of the ways in which people live and identify themselves. Having this mechanism for open identity emphasizes the legitimacy of people being who they are and loving and being attracted to whom they wish.

To fully understand LGBTQIA Pride Month we must first be aware of our not-to-distant U.S. history - the Stonewall Riots.

The Stonewall Riots occurred in June 1969 when police instigated a violent raid on a gay bar called the Stonewall Inn in Greenwich Village, New York. This raid was not a new event, it was just the straw that finally broke the camel's back after many, many raids of gay bars across the city. According to The History Channel website, "New York State Liquor Authority penalized and shut down establishments that served alcohol to known or suspected LGBT individuals, arguing that the mere gathering of homosexuals was disorderly." It goes on to say engaging in any kind of "gay" behavior with the same sex, be it holding hands, kissing, or even dancing was illegal at the time. There was even a "gender appropriate clothing" statute, where you had to be wearing at least four items of "gender appropriate" clothing to not get arrested.

At the June 1969 raid, this time people refused to go to the bathroom and people refused to give IDs. In response, the police threw patrons against the wall and performed some genitalia frisking. There are different accounts of how exactly the violence began but all accounts align with self-defense of one's personal boundaries. One account says someone fought back during one of these inappropriate friskings. Another account says that Tammy Novak, a transgender woman, told a police officer to stop shoving and poking her with his baton. When he didn't stop she struck him over the head with her purse. Once the violence broke out, word spread quickly, and a revolution that had long been stewing finally exploded. Protests spread across the U.S. for nearly a week, and the Stonewall Riots marked the beginnings of significant vocalization and action towards protecting LGBTQ human rights.