A Shift on Moonlight Buttress

By Lor Sabourin
There are some offers that you cannot refuse.

When my girlfriend, Amanda, offered to support my lead push on Moonlight Buttress for my 25th birthday, I agreed immediately. I had dreamed about climbing Moonlight for years and knew that I would learn from the experience. But at that time, there was no way of knowing how much I would let go of on a single day of rock climbing.

We crossed the icy river at 5 a.m., stripping naked, and immersing ourselves waist deep, trying to keep our gear dry. I shrieked as the water splashed up to my ribs. Amanda laughed and held my arm tighter.

I remembered a time when I was afraid to be touched.

“You can’t know you’re gay,” they told me, “until you’ve at least slept with one man.” So I gave it a try. It turned out, I didn’t like it. But when I asked to stop, it didn’t end. I had imagined losing my virginity in a more intimate way. I had imagined feeling awkward, but also feeling safe and loved. Instead, I learned what I didn’t want. When it finally ended, I went to the climbing gym. I was still bruised and bleeding, but I sat in the bouldering cave, with my knees curled up to my chest, and listened to friends spray about the purple problem. I didn’t have to worry about crying. At that moment, it felt like I had forgotten how. I started ghost-walking through the world, shrinking away from the people that threatened to enter my force-field.

Now, I sank onto the overgrown shore on the other side of the river and pulled Amanda into a hug. “Thank you for making me feel safe,” I whispered. She squeezed me tighter and ruffled my hair.

The first hard pitch on Moonlight Buttress involves a leap of faith off the “rocker block,” a loose ledge that is chained to the wall. As I launched my body to the first hold, I was struck by the feeling of power surging from my legs. “This is what it feels like to have a body that is cared for,” I thought as my hands connected with the next holds. As I finished the boulder problem and balanced myself at a rest, I took a moment to appreciate the work that I had done to get there.

I recalled a day from two years prior, during a particularly rough bout of eating disorder behavior. I was several hours deep into a training session at the climbing gym. During a break, fatigued and distracted, I had finished the bag of rice cakes and jar of peanut butter that I intended to ration for the week. Looking at the empty bag, all that I could see was failure. I looked around the room at ripped, shirtless men. At the time, I didn’t understand why I felt like a failure when I compared myself to them. It was years before I understood my gender identity. I held onto the idea that if I could just be a little closer to “perfect,” maybe I wouldn’t feel so much pain.

I ran to the bathroom to purge. When I was done, I slumped against the toilet. I knew I was destroying my body. I felt a burning sensation in my chest. “Tears,” I thought, hopefully. Maybe I would finally find some release. Instead, I burped violently, and the rest of the spongy rice and stomach fluid filled my mouth. I reached into my pack for some mouthwash and moved to splash my face with cool water in the sink.

There was no dramatic intervention or miracle moment that transformed my relationship with food. Crawling out of an eating disorder as a transgender person is an act of blind faith. You are choosing to take care of a dysphoric, disconnected body. At best, it feels like mending holes in your scratchiest, most uncomfortable sweater, when all you want to do is shrink it in the dryer to justify throwing it away. At worst, it feels unbearable.

Even on the worst days, though, when I would rather be anywhere else, I learned to wake up and do hard things. I learned to eat three meals a day plus snacks - including the foods that I had not deemed “safe.” I learned to hold that food in my body - even when I was full. I learned to train on a reasonable schedule - even when I felt that I would explode if I didn’t stay in motion. Slowly, I watched my body get stronger. I leaned into climbing and allowed myself to track the small changes in strength and stamina as marks of progress. The movement of climbing felt innocent and unblemished - unattached to the same triggers that surrounded all the other aspects of having a body.

And so, finishing the last few moves on the crux pitch of Moonlight Buttress, I felt a small spark of gratitude for the now-healthy body that helped get me to this spot.

Then at the top of an endless pitch of baggy fingerlocks, I saw my friend Becca. She was preparing to top-rope solo, and as I crawled onto the belay ledge, she shared an infectious grin and a high five. I told her what Amanda and I were up to and her welcoming smile widened. 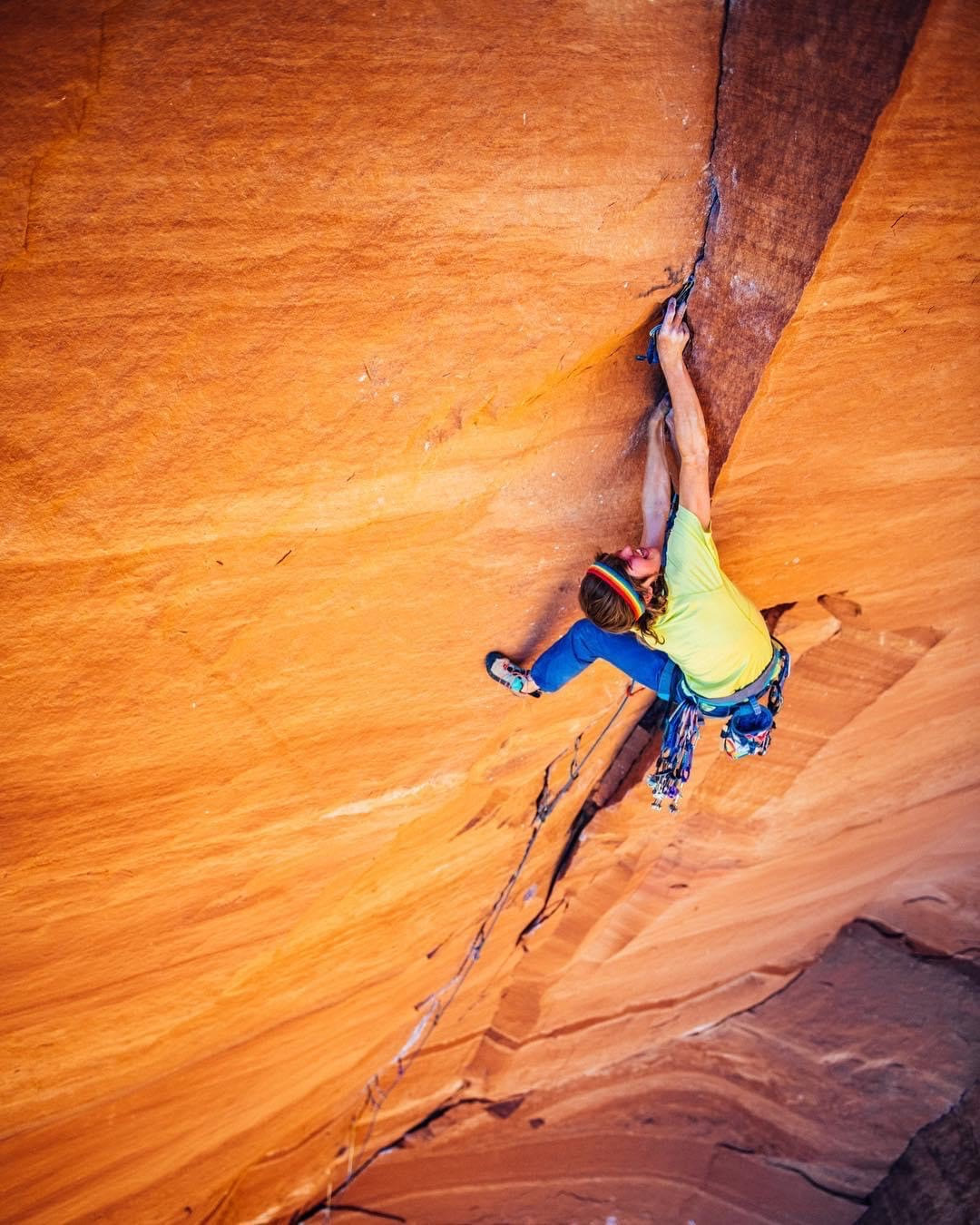 Lor on a difficult finger crack in Sedona, AZ.
I remembered a time when I didn’t trust others enough to share joy. I recalled the stabs of loneliness and isolation from those first years of coming out - my little nine-year-old brain trying to wrap itself around the heartbreak of being called a pervert and a burden. “If you decide to be gay, it won’t be easy,” I learned from the adults that I trusted. “You won’t be able to have a family. Or, a normal relationship. And, It’s hard to hold down a job.”

That was when I learned how to make little cuts on my body to distract myself. The more it hurt inside, the deeper I would cut. I l hid the cuts under my clothes and I never cried when the blade sliced my flesh. I knew that it was what I deserved. The cuts were punishment for being a bad kid. For making so much trouble. Even when I stopped cutting - making paper chains with a link for each day around my bedroom to celebrate kicking the addiction - I had not yet taken the time to believe that I belonged in my community. I just didn’t want people who were important to me to be worried.

But here, at the top of the hardest pitch on Moonlight, my friend welcomed me with so much physical affection, I experienced another small release. “I’m safe here,” I thought with surprise. Of all places to feel safe - hundreds of feet up a wall on a tiny foot ledge.

I moved upward. On the nutting pitch, a pitch with modest run-outs between bomber placements, I felt a familiar fear creep up in my stomach. It’s a fear that things were going to go wrong. That even when my piece was solid, I couldn’t trust my hands and feet to move.

I had been in this place of fear before. I remembered a friend, in my late teens, who confronted me after another failed attempt on the steep lead wall in the gym. I had stopped, again, in the middle of the wall, and asked to come down. I was shaking but, as usual, my eyes were dry. He put his hands on my shoulders and gave me a gentle shake. “Aren’t you tired of feeling afraid, kiddo?” he had asked in a gentle voice.

The thing he didn’t realize was how deep that fear ran. For every painful moment I had experienced, I had anticipated ten more. I played out these nightmares in my head at night, grieving the losses before they occurred. I wanted to be ready for a cruel world. I didn’t realize that, every night, I was destroying my own reserves.

Here, on the final hard pitch of this revered route, I remembered his words. I took a deep breath and kept climbing. The moves were not as challenging as I had imagined. In fact, after two small holds, I began cruising on large incuts. Before I knew it, I was clipping the anchors. I realized my fears were so much more intense before I began moving.

At the top of Moonlight Buttress, I laid down on my back. To my surprise, tears welled up and trickled down my face. I could feel them cutting through thick layers of red dust, creating little dirt streams. Then I started laughing, gently at first, and then deep belly laughs that rocked my whole body.

I wasn’t a new person. I was the same person, filled with bruises and scars, but in love with the world and myself in a way that I had never dreamed possible.

Amanda joined me at the top and I wrapped her into an embrace. “Thank you,” I said, trying to send a thousand messages in those two simple words. She wiped a wet dusty stream off my face. “I love you,” she said, sending a thousand messages of her own,  “I’m so proud of you. This took a lot of work.” 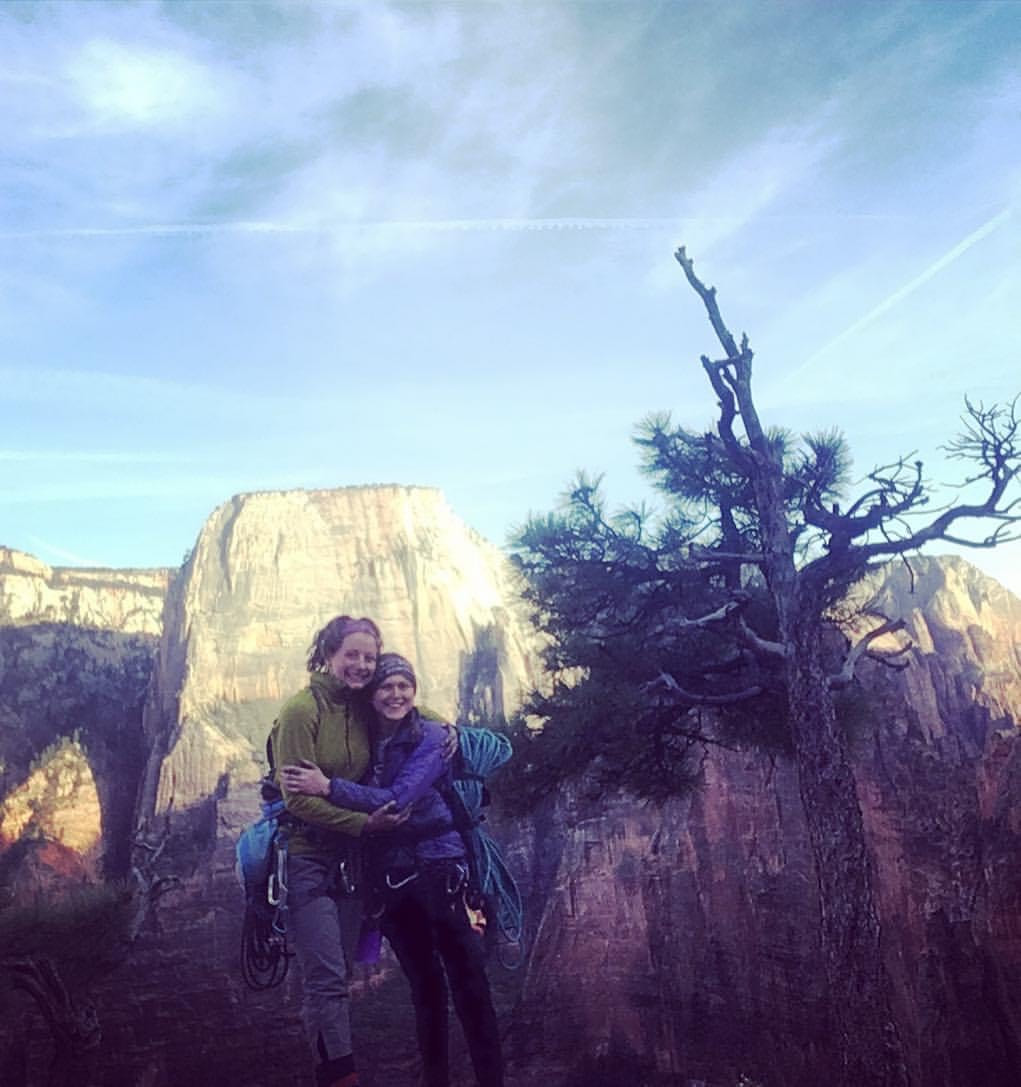 Lor and Amanda at the top of Moonlight Buttress after thier successful climb.
Check out more of the "Honoring Diversity" edition.