Photos and Story By Wil Treasure
It's a trope of journalism that the best stories are about failure. If you look at the most successful stories in climbing the same theory seems to hold; Touching the Void, The White Spider, The Philosophy of Risk and many more are all about failure and suffering on a grand scale. Even the modern video content is about repeated failure before success, or the high consequence or likelihood of failure. We need stakes.

So, naturally, this is a story about failure. But no-one gets hurt. No-one even gets particularly cold. No storms occur and everyone gets their dinner. It's a single moment in time which describes the joy I find in climbing and the fact that failure is really just about framing.
Taghia is a wonderful place. Two and a half hours walk from the nearest road, itself a gravelly track through the Atlas mountains, you reach the barrier of limestone faces and gorges that mark the end of the valley. A few hundred self sufficient Berber Farmers live here. There's a primary school, a small shop and a couple of guest houses. Days are simple; children in the playground, people tending the tiers of fruit and vegetables patches by the river and walking herds of sheep and goats around the valley to make the most of the sparse pasture. 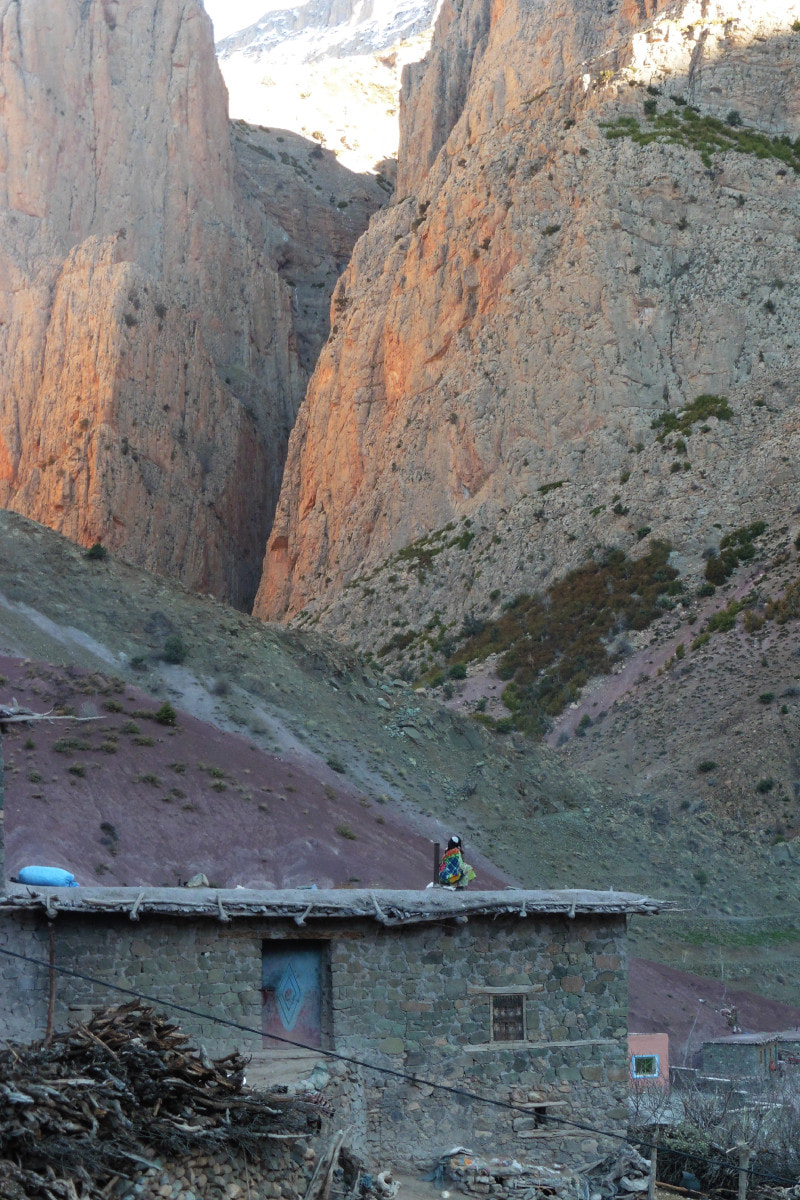 Houses in the village of Taghia run one into the other down the hillside. Sitting on your neighbour's roof to enjoy a pot of mint tea and a break isn't unusual.
​We arrived in the middle of March, with the north faces dusted with snow and the greenery subdued, but it was beautiful. We spent a week shivering up the faces before the weather warmed and spring arrived, the cherry trees blossomed and colour began to return. With the cold winds dying down we began to think of more adventurous objectives. We settled on a route called L'Axe du Mal, the axis of evil. It tackled one of the most spectacular walls deep inside the gorge. It was above our pay grade, but we figured with a few sneaky pulls of gear on the hardest sections we'd get up it. 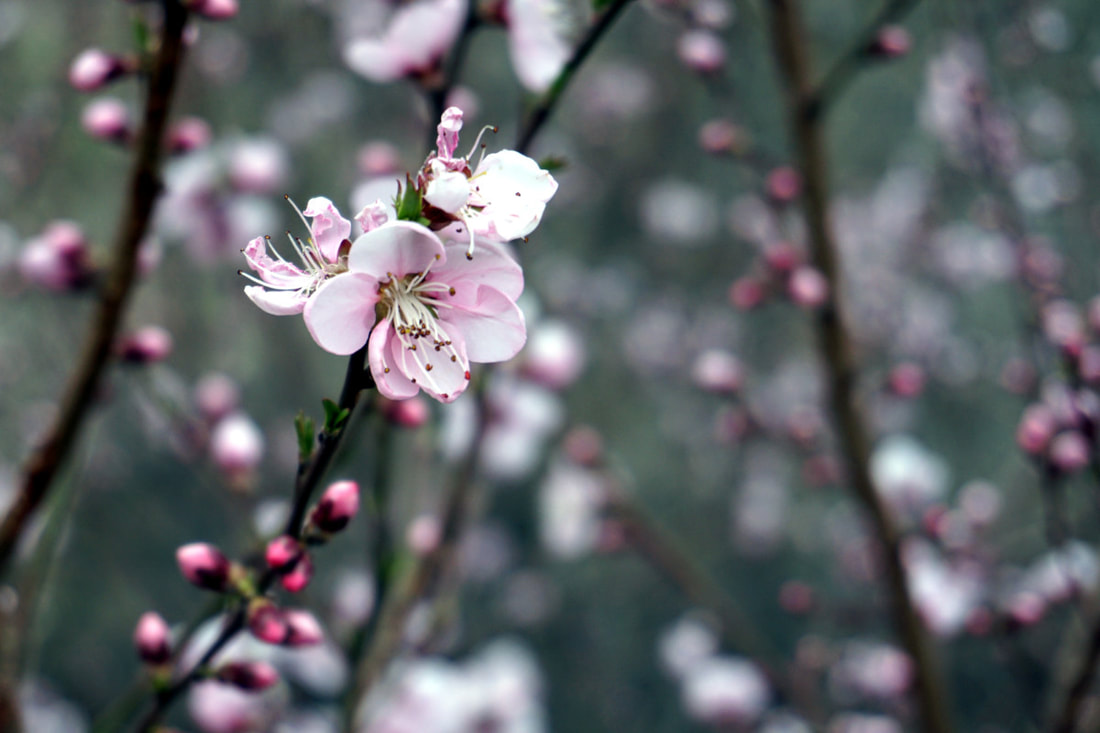 March brings out the the cherry blossom in the valley.
We set off at 5.30am, bellies full of mint tea and instant coffee. The approach is an adventure itself. It took the best part of three hours to cross the hills and traverse the gorge on the Berber paths. Several sections are hammered directly into the rock faces. Eventually we were boulder hopping in the base of the gorge and the sun had risen high enough to light the tops of the faces. We stomped through snow patches in the cold depths of the gorge until the 600m west facing wall appeared, lit by the light reflected from the opposing wall. 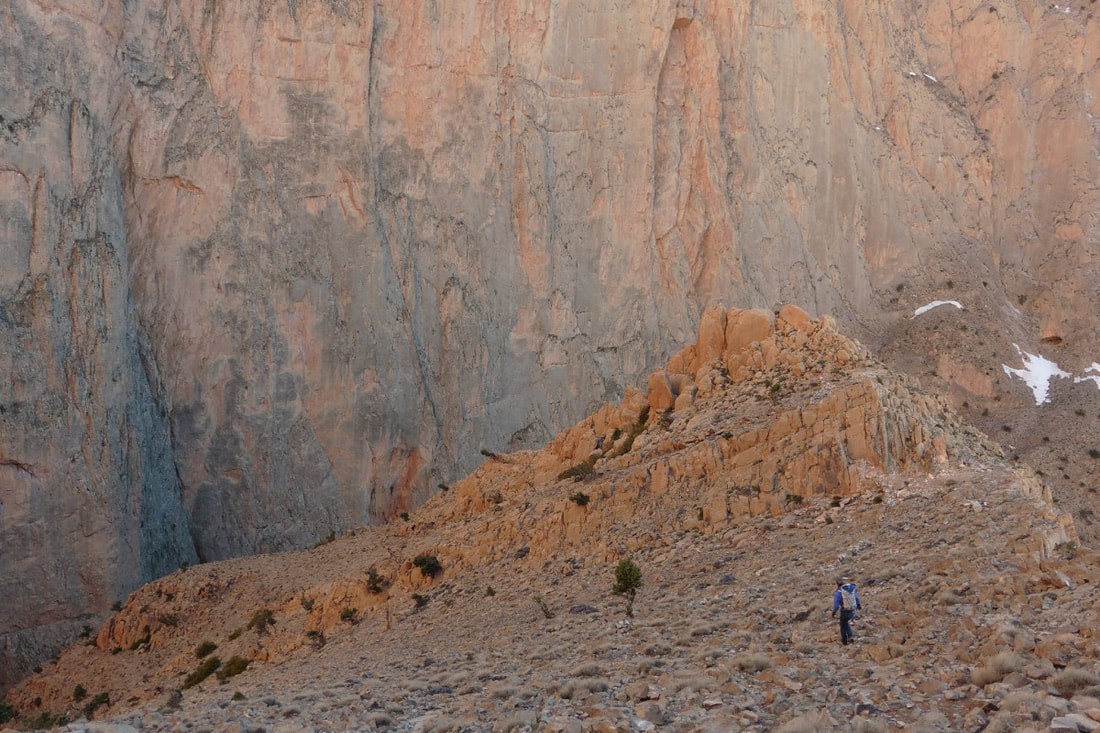 Evening light on the huge 800m face of Tagoujimt N'tsouïan. 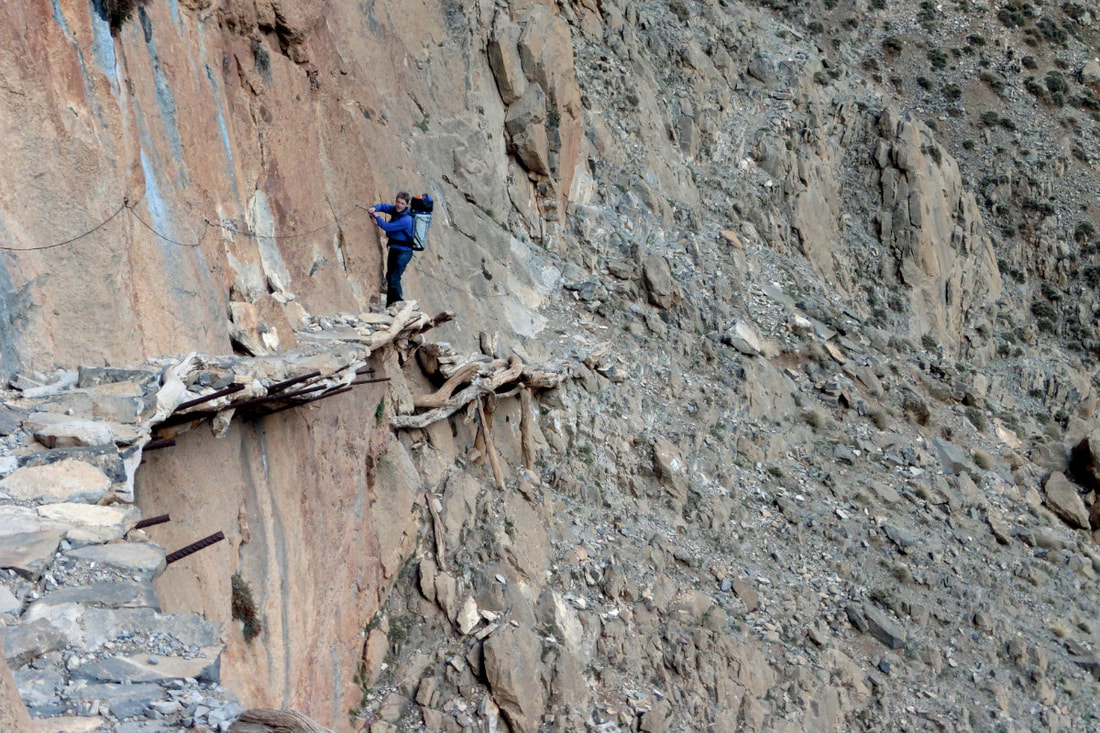 The shepherd's paths used through the gorges and mountains can be pretty exciting.
​L'Axe du Mal is certainly imposing. The face is slightly concave, steepening slightly with each pitch before busting through a boulder problem in an overhang at 350m. The wall glows golden in the afternoon sun, but a sombre terracotta in the morning shade. It's a sport route in the sense that it's bolted, but all adventure in practice. We were in the wall by 8.30am, getting a shock from what was supposed to be the easiest pitch. The bolts were spaced and the route follows the worn water runnels in the face. Jugs appeared occasionally, but for much of the route you are on your fingertips. The friction is amazing, the climbing intricate and often blank and confusing. The run-outs added spice, being 10m out from the last bolt and with no prospect of rescue should an accident occur certainly focuses the mind.

Duncan and I swung leads for 10 pitches, hauling a bag with food and belay jackets. The sun hit the wall in the early afternoon making the shade at the bottom of the gorge seem even darker. We climbed out above the shadows, every pitch a joy, every pitch hard. We reached the roof and both fell for the first time. Another pitch or two and we were done. 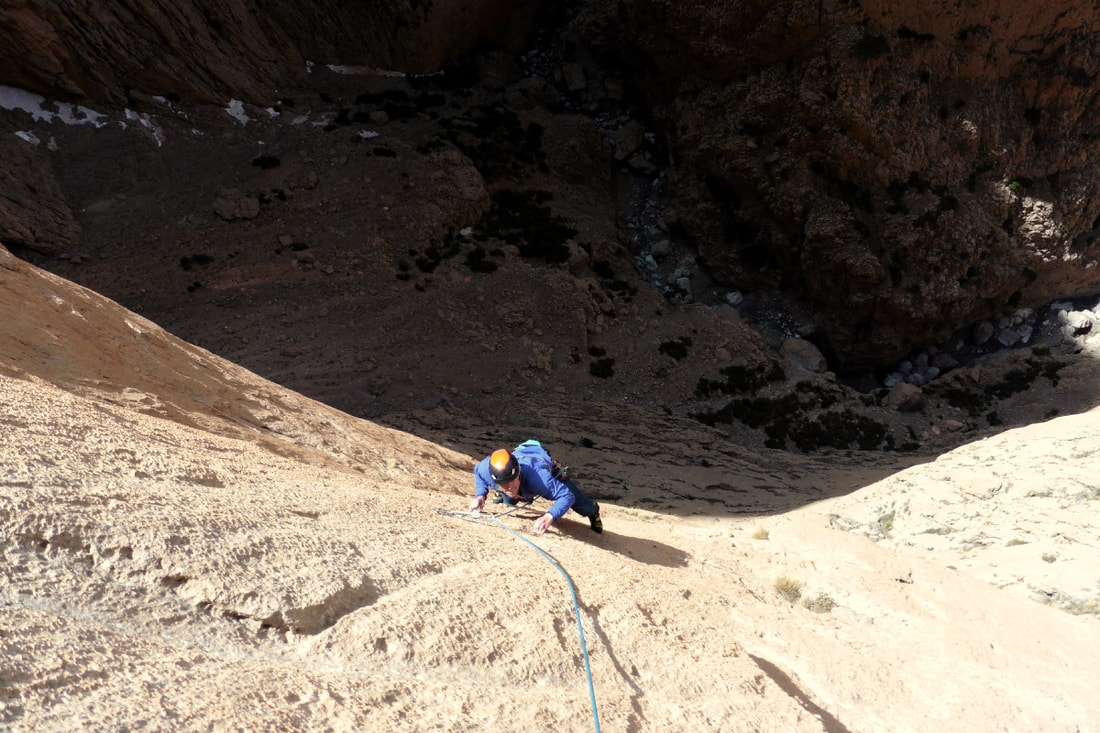 High on L'Ax du Mal F7c+ (5.13a). The water worn features are often small and difficult to read, but the friction is excellent and patient climbers will be rewarded with hidden crimps.
​We weren't at the top. It was unspoken at first. Climb with someone for long enough and you know what they're thinking. We had the same experience on a first ascent in Greenland a few years ago, when it was getting late, we'd run out of food and had no bivi gear, yet we both carried on. There was no need to say anything, just get on with the job in hand.

In Taghia it was the same, but different. We both knew we'd failed. We'd expected to fall, but the climbing had been so absorbing that it had taken longer than expected and the upper pitches were harder. Descent from the summit would be complex in the dark and a mistake would be a bad idea. We'd just climbed 10 of the most unrelenting and intricate pitches we'd ever done. Every inch of the climb was a joy. The situation incredible; exposure, sunshine, shadow and isolation. We cut our losses and abseiled down. The face was so blank and steep that every time we pulled our ropes they shot down past us, never catching or tangling. In an hour and a half of abseiling we'd undone nearly 500m of glorious climbing. A failure, but the best kind. If we'd had the same day on single pitch routes in Spain we'd be smiling for days. Out here in the mountains it's a smile that doesn't leave. 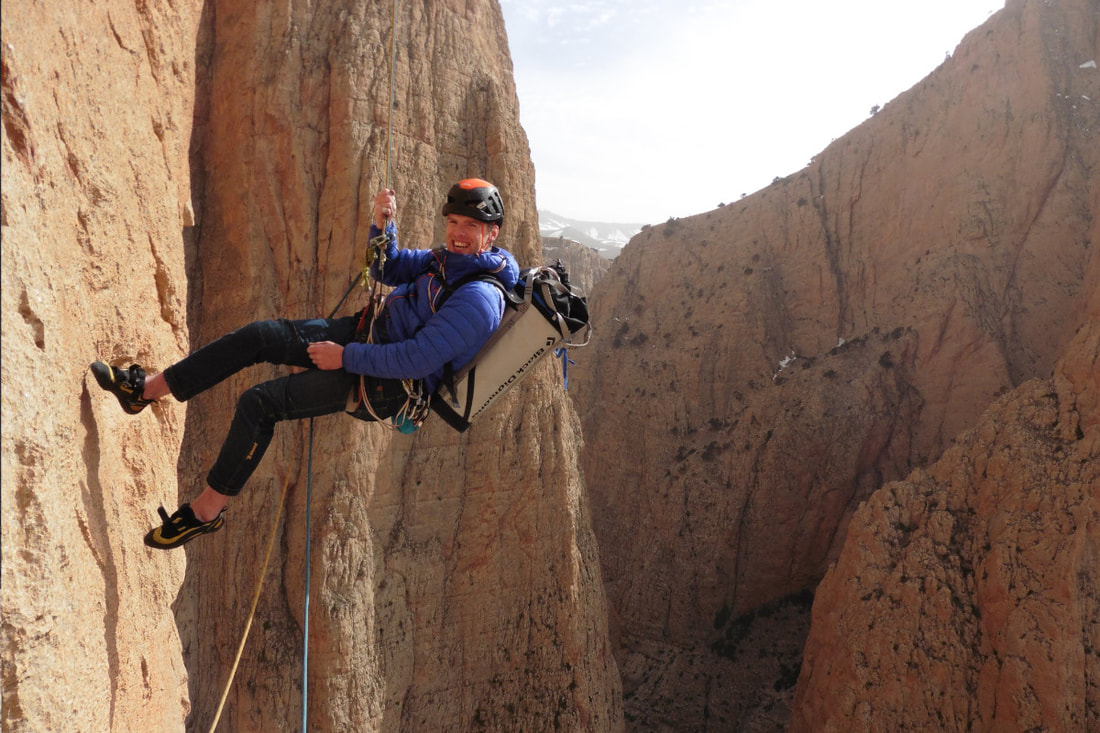 Retreating from L'Ax du Mal on Tadrarate. The 5.12 crackline of Berbere Rouge, soloed by Alex Honnold, can be seen in the background.
We picked our way through the gloom in the gorge for three hours and found ourselves back in the village, a warm tagine and mint tea waiting. The stars are so bright that the mountains glow, hints of mist wash across the faces.

It's a failure on paper, but that's not the full story. 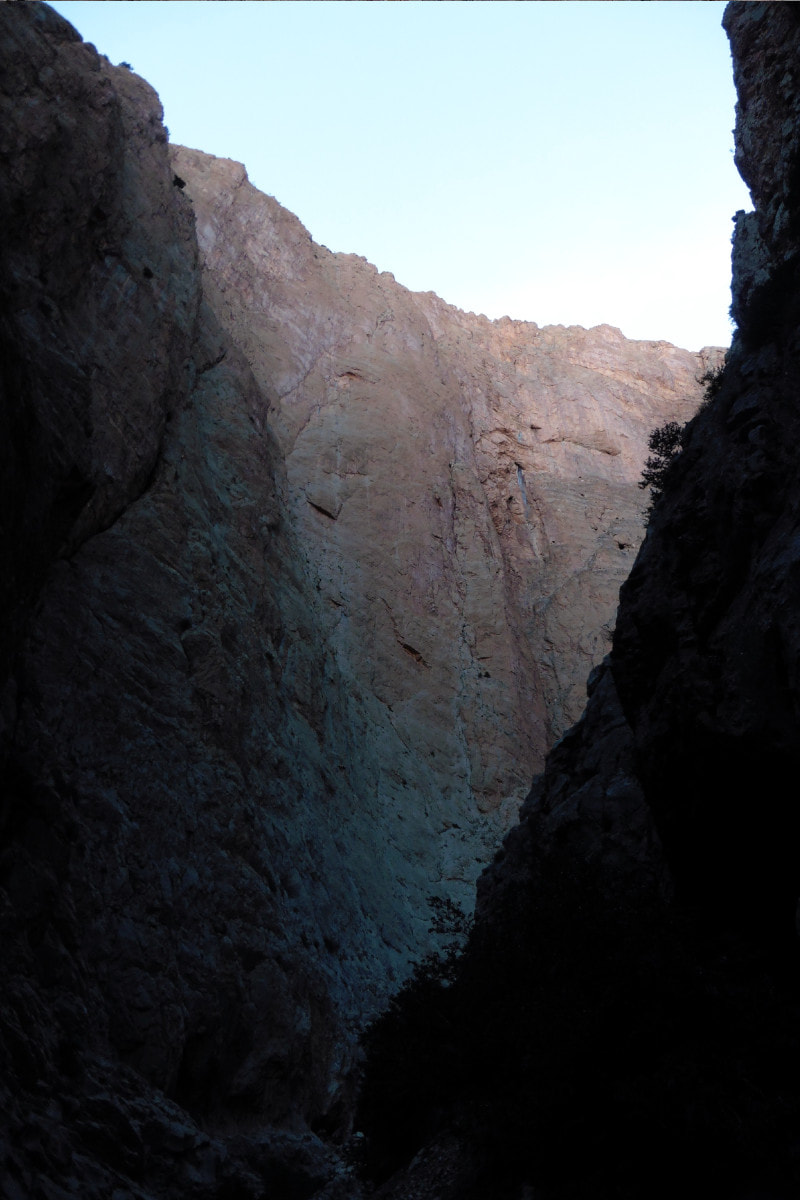 The west face of Tadrarate emerges from the depths of the gorge in the morning shade.