​The Adventure of a Lifetime…So Far

By Dierdre Wolownick
When you think of big wall climbers, it’s not generally an “elderly lady” who comes to mind. That’s what my son, Alex Honnold, called me during my first year of climbing, when he led me and another “elderly lady” friend up Snake Dike on Half Dome. Eight years later, when I climbed El Cap with him, I was even more elderly.

​Each year, for the last eight years, Alex has led me up something extraordinary for my September birthday. Extraordinary for me, that is; he rarely ever puts on his climbing shoes when we climb together. I’ve done all the moderate classics in the Yosemite region — Matthes, Tenaya, Snake Dike, Cathedral. Even Conness. The list is, at least for me, quite impressive. And three months after he amazed the world with his free solo of El Capitan, he led me up the same big — monstrous! — wall.
​
After we did Royal Arches together, it occurred to me that I might also be able to get myself up that other big wall just down the road. He agreed (I don’t think he really believed his elderly mother would do it), and I started training. I made a schedule, as I had done for my four marathons a few years earlier, and stuck to it. Eighteen weeks. Cardio on Yosemite’s vertical trails. Jugging all the fixed ropes on both faces of El Cap, up to a thousand feet. Three days a week, for eighteen weeks.
So when I finally was actually up there, I had already made friends with the exposure, the mind-numbing emptiness. The huge trees that look like tiny, distant broccoli florets. To be absolutely clear, I didn’t technically climb the rock. My feet did, kicking at it as I worked my way upward with jumars. I ‘laddered’ my way up the static rope that Alex attached at every pitch. Until I was completely spent. And beyond.

When I climb with my climbing friends from the SacramentoValley, they worry about me. This or that climb is too hard for me, or too high, or just too far a hike. Alex doesn’t. He knows that whatever goal I set for myself, I’ll get there, one way or another. I’m not strong enough or knowledgeable enough to clean an aid route yet; I’ve tried many times. So I jugged the whole thing. The whole thing!

My climbing skills improve every year, just a little; I occasionally lead a (moderate) route, here or there, and I’ve gone back and done a route from my first years and discovered that I have, indeed, learned things along the way. 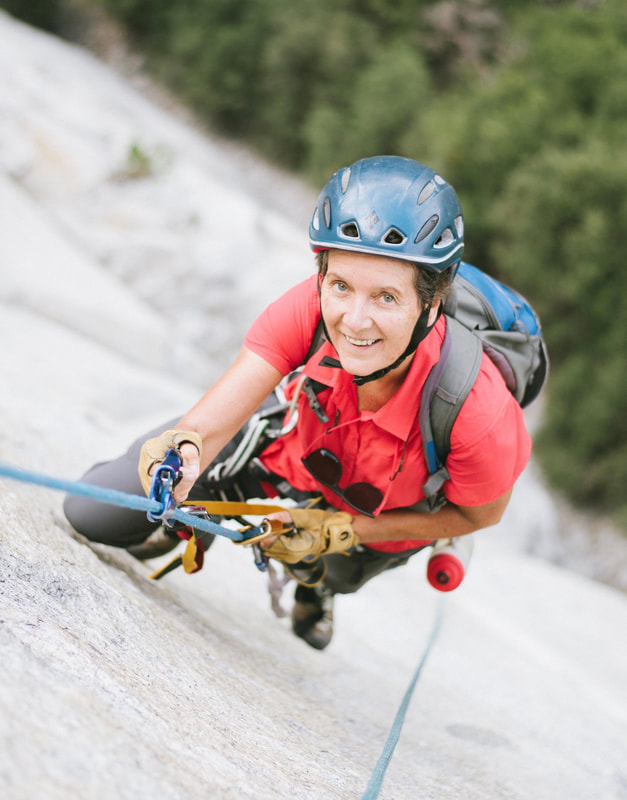 Dierdre on El Capitan. Photo courtesy of Mountaineer Books
When I was a little girl, in New York, I loved climbing! Lampposts, trees, garages, whatever, we climbed them all. But I was supposed to act like a girl, wear dresses, not hang out with the boys (but the little boys had all the fun!). So I behaved myself, followed the rules. I probably could have been an accomplished climber, but that wasn’t the way back then (at least, not for little girls in our eastern European, NYC environment). So my son probably inherited those vertical-loving genes…but he’s taken them to the next level!

Our levels are worlds apart — but he’s patient, encouraging and the best guide in the world. I can’t wait to see what we’ll do next.