Photography & Story By Matt Westlake
Recently my dear friend Stas accomplished a lifetime goal of his. ​

Being present for such a moment in a friend’s life is an honor - especially when said goal is to solo two climbs, Fearful Symmetry (WI6) and Rainbow Serpent (WI6). 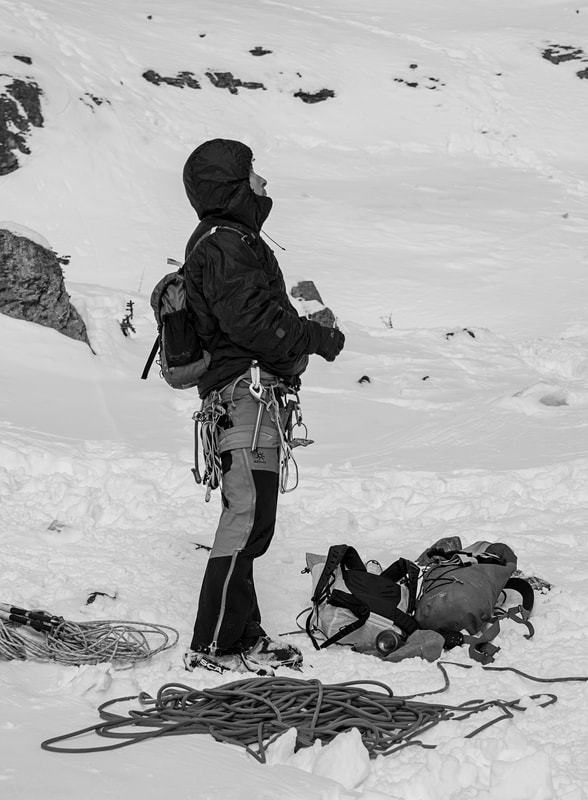 Stas
“Are you okay?” my girlfriend Joceline asked the night before. A blank face while staring at a peg board full of gear had probably caught her attention. Giving my head a shake I said, “Yeah, I’m good.”

Meanwhile, in my head, I was sorting a list of gear and a course of action in preparation for the worst outcome. A sort of grim mentality to operate around, but, what can I say, Boy Scouts “Be Prepared.”

I tossed 5 extra slings, 4 lockers, 3 pulleys and 6m of cordelette into my pack. My photo rope would stay with me all day. One tourniquet and a reflective blanket seemed about all I’d be able to provide in the worst case scenario, until further support arrived.

​With the essentials ready and game plan in mind, I was breathing easier and felt confident in my decision to photograph a friend solo at such high output. ​ 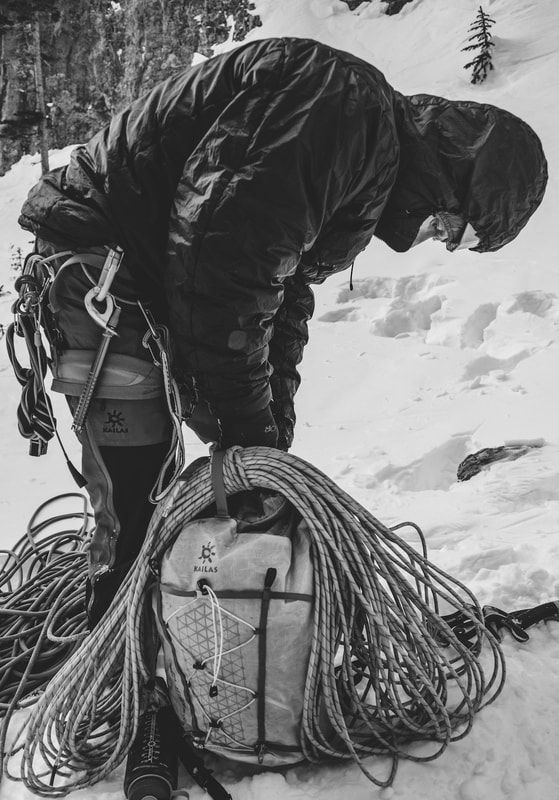 The three of us made quick work of the approach. All of us soling the WI3 approach ice to the base of Aquarius. Two weeks prior I was doing this task in a hand splint sheltered by an oven mitt. Much more pleasant the second time around I’d say.

Aquarius is a 60m WI4 route. It’s essentially the gatekeeper to the Recital Hall. Pinched between two canyon walls with the steeper climbing at the top. “You may enter if you can pass” is what you may think when looking at it - knowing damn well the real treasure lay above, tucked out of sight.

Eighteen minutes after leaving the ground, Stas stretched the ropes to the top.  Sans screws - sans belay. I wasn’t stressed watching this. The precision in each of his movements is reminiscent of a well-rehearsed ballet. Except without the soft consequence of stumbling on a dance floor.

Stepping back into the Recital Hall, a familiar feeling settles in -- the one that makes your entire being feel like you are exactly where you are meant to be. I guess that’s what brings us back to these places. Not the frozen stiff toes, the split forearms, or the core shaking temperatures. It’s the familiar and warm welcome we feel when greeted by frozen giants.

Stas asks me which one first.

I don’t want to make this call.

​I tilt my head towards Rainbow Serpent. He looks at me and points to the base of Fearful Symmetry. That settled that. 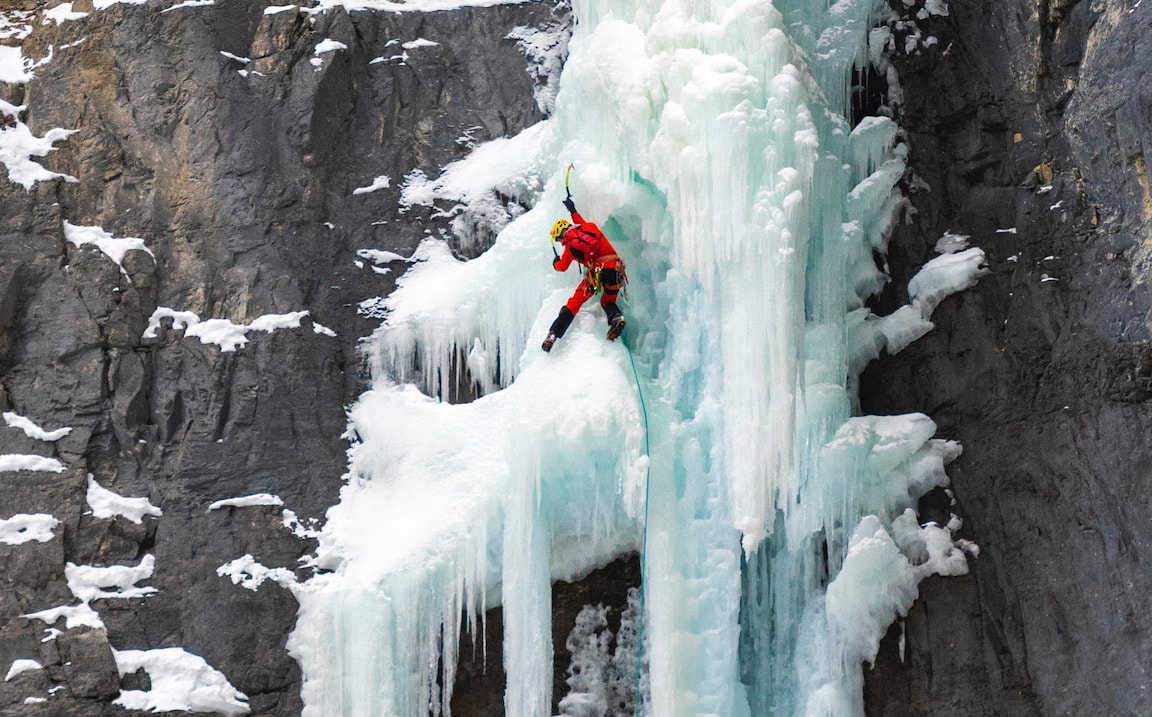 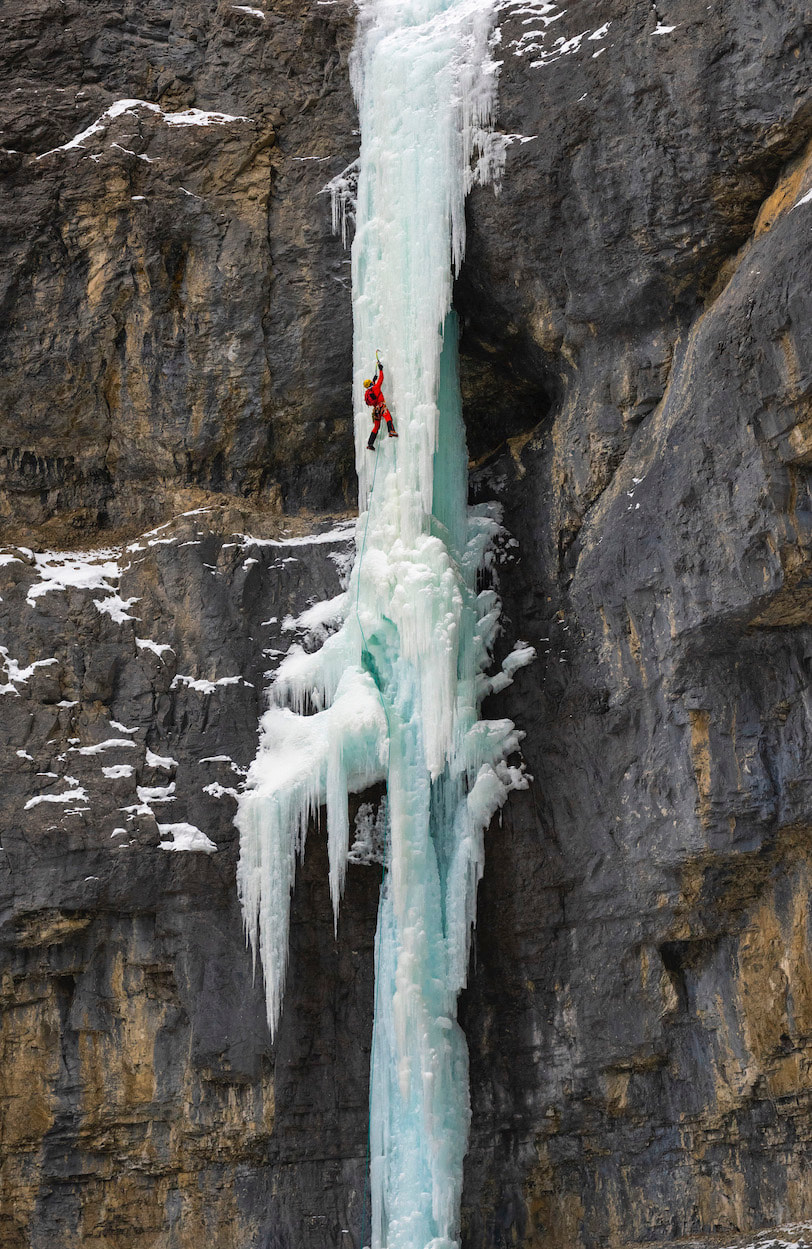 I’ve had the opportunity to photograph Stas a handful of times; It’s always incredible to witness. He climbs with this armour that seems much stronger than any possible ice screw; apparently lighter also. I’ve seen him on runouts that made me wish he’d stop to place another screw; but, I’ve realized now an object in motion stays in motion. There’s physics that prove it.

Twenty-two minutes later, Stas stood a top Fearful Symmetry, arms spread wide. Silence that shouted with happiness erupted. Phillip made quick work of following, bringing the tagline for the rappel along with him.

Rainbow Serpent felt a little heavier while staring through a viewfinder. Not because of Stas’s performance or conditions; But rather the entire climb stretched the length of the frame – it’s longer and steeper, twice the length of Fearful Symmetry. 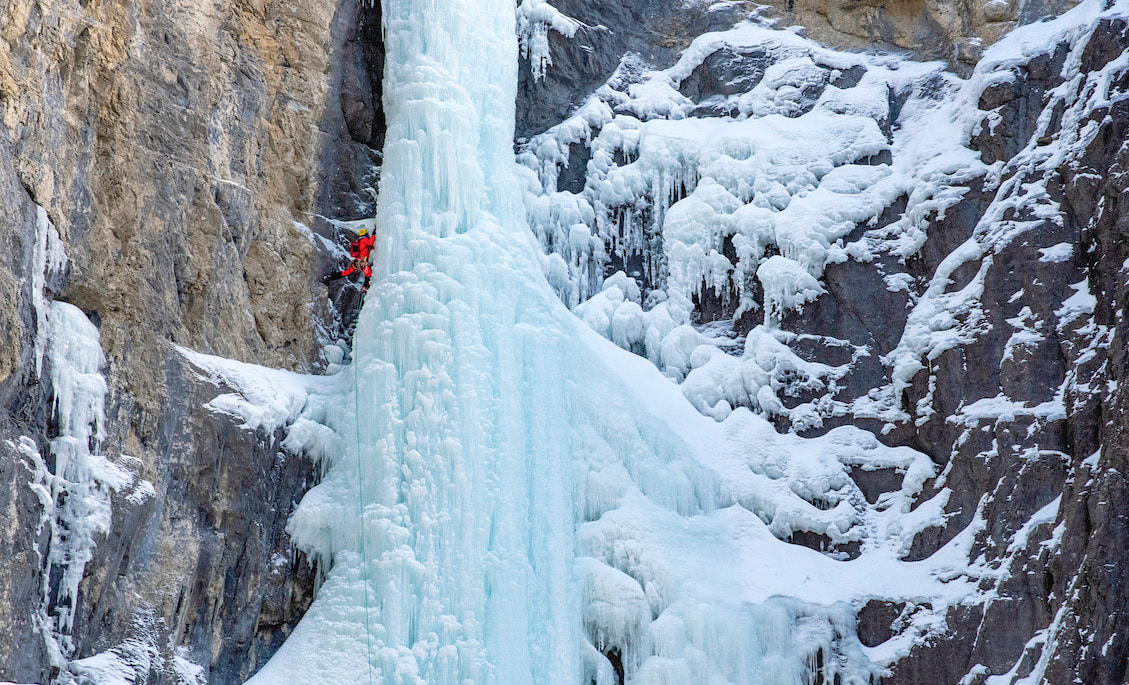 The sound of falling ice becoming a deeper and deeper thud on the snow below. My eye’s widened each time.

Just below the final pillar, in a nothing but Stas manner, he shouted out “this is good shit man.”

I responded commenting on how controlled he was.

He then chuckled and stated “I wouldn’t want to be here if I wasn’t.”

Silence fell once more as he made his way up the final pillar – 50 minutes of climbing.

Asking if satisfied, he replied, “Very”. As was I. Satisfied everything went per plan. Satisfied we would all return to another day in the mountain.