It's always nice to get oriented to a place in a climbing photographer interview, since many shots are often based in and around where you live. So, tell us about where you are from and where you currently live.

I’m originally from Wales in the United Kingdom. I moved around a lot during my twenties with work and play, but returned back to the mountains of Snowdonia in Wales in my thirties.
After having kids, the climbing and photography took a back burner for a few years, though my good friend Andy Scott kept the embers stoked by dragging me out whenever he could.  As soon as the kids, especially my daughter, showed interest in climbing it reignited things for me. I’m now working hard to stay ahead of my daughter, though she would claim that ship has already sailed.
What is your relationship between climbing and photography, how do approach it or balance the two?

I’ve always been happy to put the camera first if the light or the climbing looks good for photography, I’ve noticed that a lot of the good climbers I know are truly obsessive about climbing, it is everything to them. For me the photography is more at that "obsessive" level and the climbing is on the “normal” scale. Now that the kids are older, I’ll be looking for some more immersive projects that I can throw myself into  - where the experience, whether it be climbing, mountains, or bike-packing merges - with the photography. 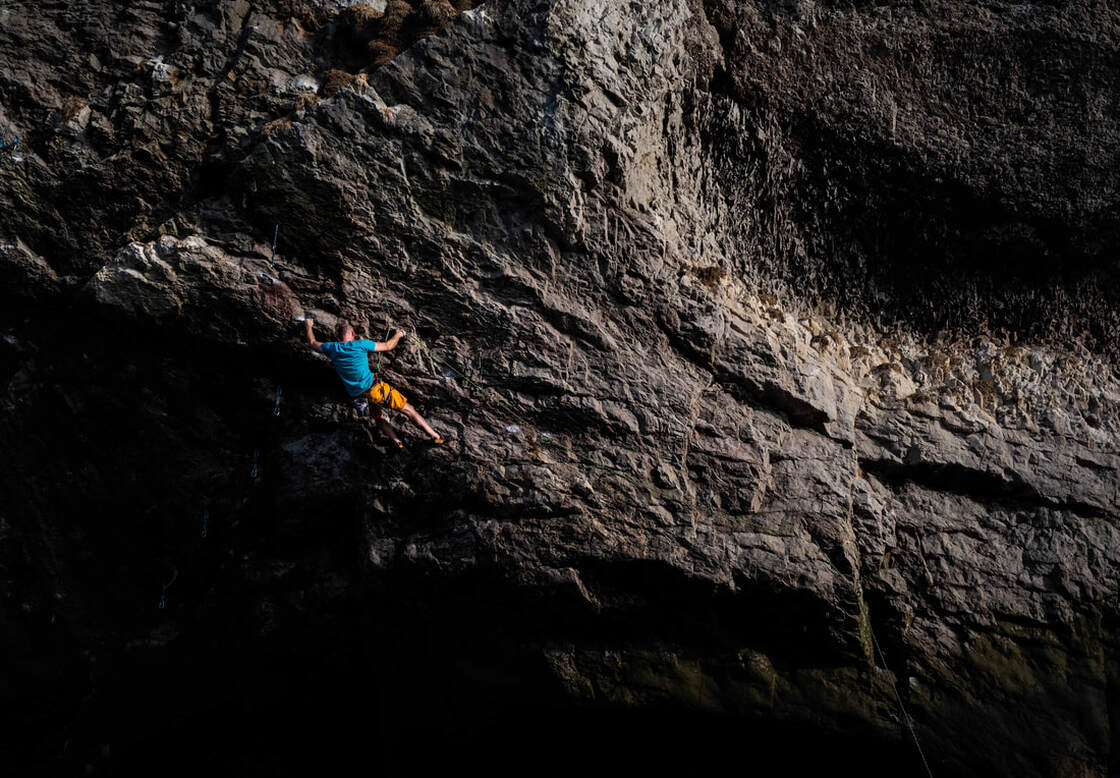 This climb is called Hysteria (7b) located at the Diamond in North Wales, U.K. Photo Credit: Jethro Kiernan
How does photographing climbing differ compared to photographing other action sports? Or does it?

I think with climbing photography you have to be a bit more immersed in the process and obviously the terrain. Photographing trad climbing can especially be tricky with its own inherent risks of approach paths, sharp edges, rockfall, etc. I think the closest immersive action photography to climbing would be surf photographers shooting in the water. 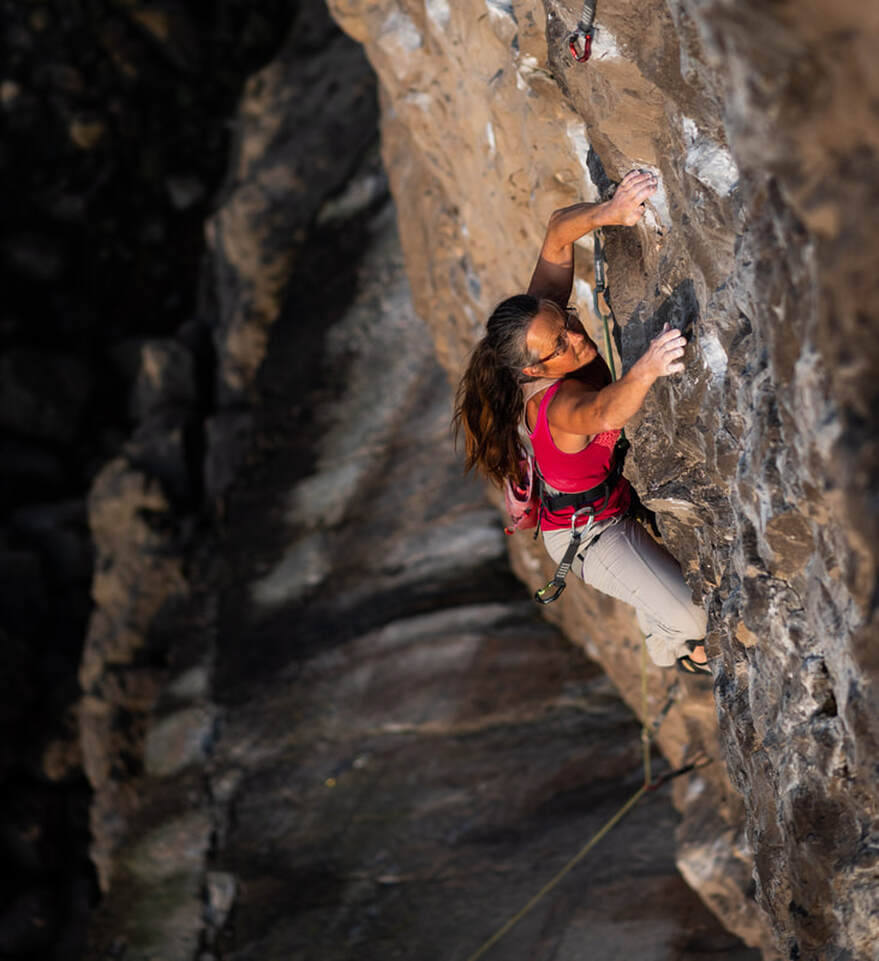 Glenda Huxter on The Shining (8a) at The Diamond in North Wales, U.K. Photo Credit: Jethro Kiernan 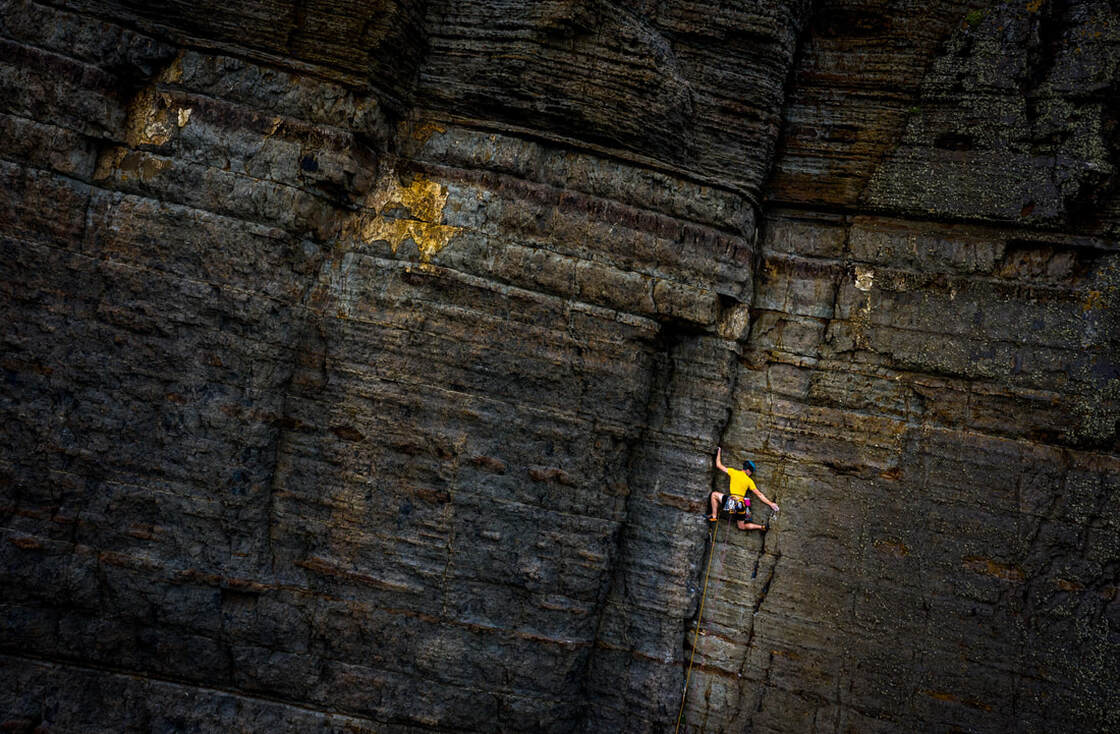 This photo was a finalist in the British Photography Awards. Archie Ball (IG:archie.ball) on Cripple Creek (E3 5b) at the Llyn Peninsula in Wales, U.K. Photo Credit: Jethro Kiernan
Photographing for 25 years is a long time. How has your photography progressed and changed?

I guess the biggest change has been going to digital. The start of the digital crossover happened when I first entered fatherhood. It was a bit of a shock when I came back into to photography and found that not just the medium changed but also the whole way of doing business. The importance of social media, drop box, etc. took over. There was no more sending a box of slides with a recorded delivery anymore. The business model is now changing again as we seeing the print magazines amalgamating and the print journal becoming a thing. And, obviously online magazines have grown. A lot of photographic work is done on manufacturer-sponsored story telling, so this will be the next big step for me.

I also think things have become more collaborative photographically. I will quite often head out into the hills with fellow photographers and we will work together to get shots. This has helped me move with the times.

Sunrise scrambling on North Wales ridges Photo Credit: Jethro Kiernan
Do you photograph full time or do you have other gigs that support you? (BTW, readers can purchase photos at Jethro's website.)

I’m not a full time photographer. I also work as a rope-access technician and do a bit of guiding. But, I do charge professional rates for doing photography work. I think this is very important to protect photography as a trade and art, obviously things have changed with regards social media and “exposure” and different business models. A certain degree of flexibility is required, but with the cost of modern gear and the beating it takes at the crag and in the mountains, you have to be careful about giving photos away, or making it difficult for other people to make money. 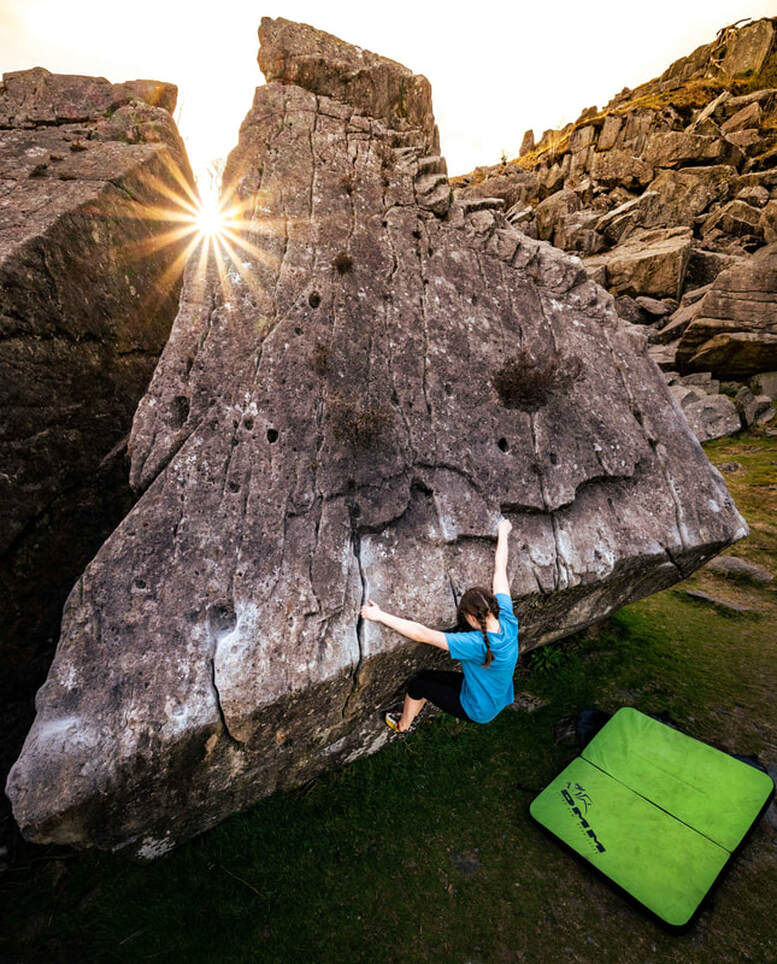 Daughter Evie Kiernan (IG:evie.kiernan_) after school bouldering at the RAC Boulders in Snowdonia, Wales. Photo Credit: Jethro Kiernan
Do you have a favorite place to climb and is that also your favorite place to photograph climbing?

The Llanberiss pass is probably my favorite place to climb, partly because of personal history with the place and partly because its on my doorstep. I have an ongoing photographic love-hate relationship with Gogarth, a well known sea cliff. It’s a scary and intimidating place to climb and photograph, but if you can get good photographs there then you get a real sense of achievement.

Alex Mason (IG: alexmasonpowell) and Gemma Powell (IG:pow.coaching) on Billy Bud an airy route at Gogarth in Wales, U.K. Photo Credit: Jethro Kiernan
Tell us about the climbing in Wales (mountaineering and/or rock). (For those of us unfamiliar with Wales, I often don't think of alpine climbing - but your photos look like there is - you can set those of us who don't know straight!)

I’m glad the photos give that alpine feel. The Welsh mountains aren’t alpine, although I have been trying to capture an alpine feel over the last few years in my mountain photography. There are various ridges and scrambles that are alpine in their feel and still provide a good warm up for the higher ranges. These have a historic place as a training ground for the first alpine ascents and the early Everest expeditions.

On the rock climbing front, Wales pretty much has it all, from hard multi-pitch mountain trad routes to super technical limestone sport routes. It's not just the mountains; the coast also offers its own unique style of climbing at places like Gogarth, which is the epitome of old school trad climbing, as well as, the slate quarries with its unique style and ethos.

Because foreign travel is going to be restricted again this year, it's nice to be able to provide a bit of inspiration for local exploration.

Classic Snowdonia ridge line Crib Coch in the winter. Photo Credit: Jethro Kiernan
As I was looking through your photos, I saw some of your daughter atop a snow-covered peak. Tell us more about your family and climbing.

Although starting a family is often seen as something that slows down the adventure lifestyle - and this is true when kids are young - as my three kids became more interested in sports over time it's helped inspire me and get me back out again - and in new ways. The eldest is a keen footballer and a pretty talented road cyclist. My daughter is a talented climber and I’m starting to struggle keeping up with her on the bouldering. She’s also trying her hand at surfing. The youngest is pretty keen at climbing and cycling and is trying out canoeing. And, with a little persuasion, they all also like to get out in the hills - plus it's pretty handy having some (occasionally reluctant) models to try photographic stuff out on in the hills. 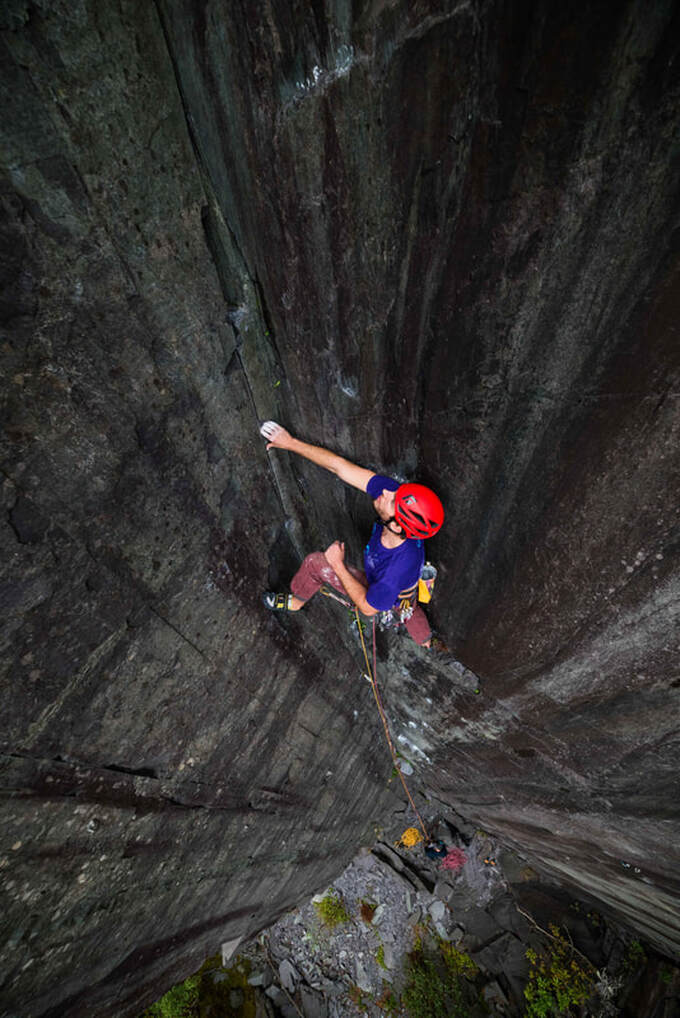 In the medium-term I want to try get back into some long-form photographic story telling, probably some kind of small expedition type trip (anybody out there need a photographer?). In the meantime, I’ve some local guide book photography to do. I am going to plan a few micro-trips around the UK.
The long-term aim is to make photography and guiding a greater part of my lifestyle and income, but I’m accepting of working in the gig economy.
Any last words for our audience?

Just keep getting out, that’s the only way to get the memories and photos. 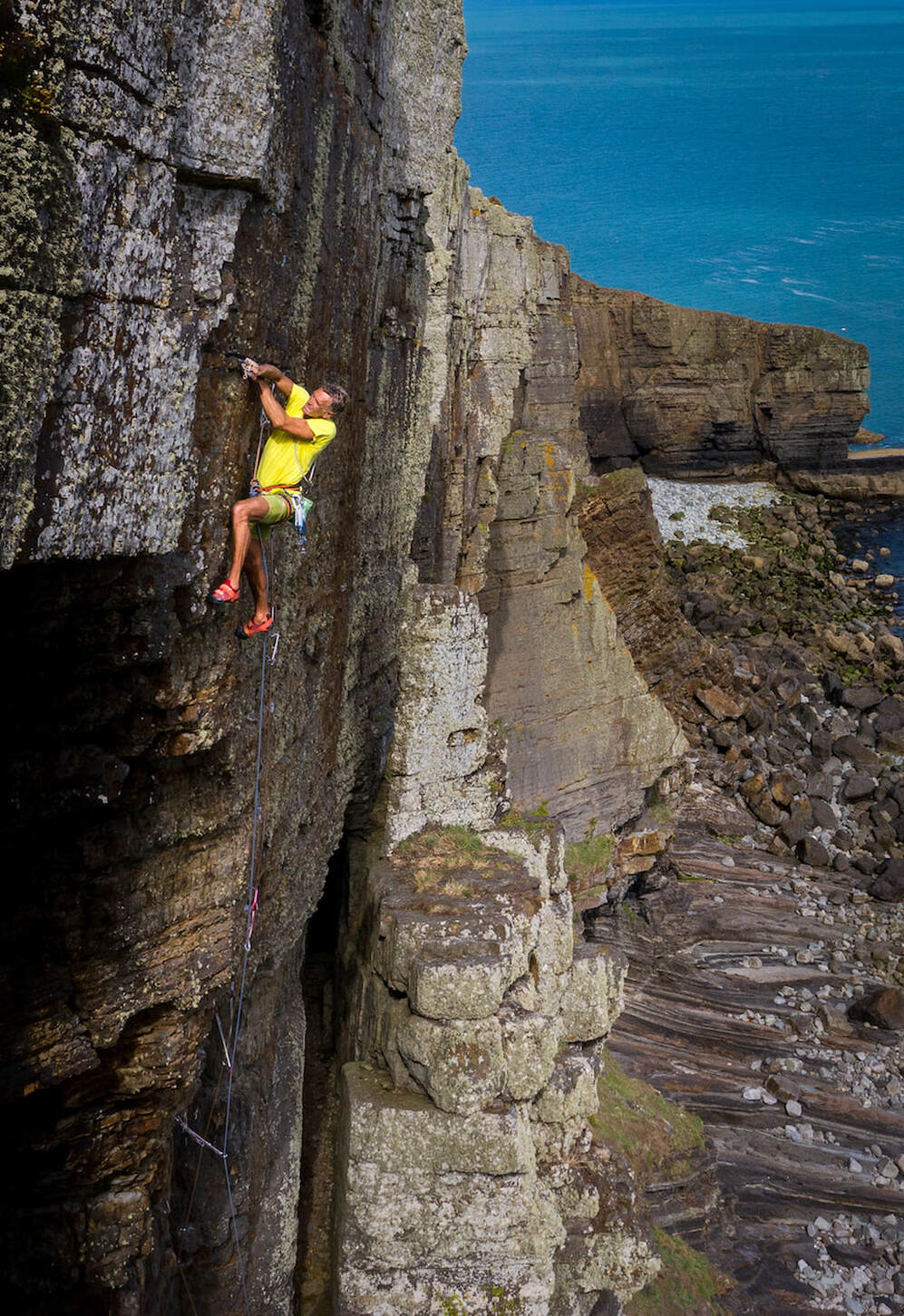